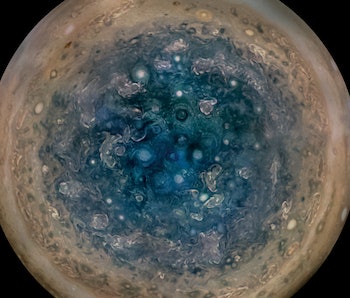 Jupiter, the largest planet in our solar system, is extremely mysterious; scientists can inspect its colorful, cloudy surface through telescopes, but can’t tell what goes on underneath. Luckily, after nearly a year of orbiting the gas giant, NASA’s Juno space probe is delivering groundbreaking insights on planet’s inner-workings.

“There is so much going on here that we didn’t expect that we have had to take a step back and begin to rethink of this as a whole new Jupiter,” Juno investigator Scott Bolton said in a NASA press release.

Juno’s Microwave Radiometer has transformed our knowledge about Jupiter’s colorful bands (horizontal ammonia clouds). Scientists had suspected that these bands might be part of a shallow “weather layer” on top of the planet lasting only a few dozen kilometers, but now it’s clear that many bands stretch much further. The deepest are at the equator and seem to go down about 350 kilometers. Bands differ in other places, most starkly at the poles; they don’t go as deep, and instead seem to disappear or shift into other structures.

Images taken of Jupiter’s poles show enormous, dense storms that are colliding with each other. The north pole looks different from the south, and scientists don’t yet know why, or whether the storms are stable or dynamic: “Are we seeing just one stage, and over the next year, we’re going to watch it disappear, or is this a stable configuration and these storms are circulating around one another?” wonders Bolton.

Juno revealed that the planet’s magnetic field is significantly stronger than scientists had expected: 10 times stronger than Earth’s most powerful field, in fact, at 7.766 Gauss. That power is unevenly distributed, though, leading to a “lumpiness” that suggests that the field could be generated by processes happening closer to Jupiter’s surface than was previously thought.

Juno is also examining Jupiter’s auroras and is already finding some differences between them and the ones that exist on Earth. Our auroras are generally caused by solar wind, but some of Jupiter’s seem to be caused by its moons, including Ganymede and Europa.

All this new data has created as many questions as answers. Fortunately, Juno still has over a year left in its mission, so it’s sure to uncover plenty more information.

Juno’s next close flyby will occur on July 11, when the craft will go by Jupiter’s famous Great Red Spot. “If anybody is going to get to the bottom of what is going on below those mammoth swirling crimson cloud tops,” Bolton says, “it’s Juno and her cloud-piercing science instruments.”