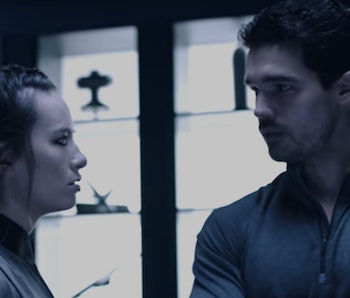 The organic doomsday device known as the “protomolecule” is an ancient alien bio-weapon and a plot game changer on The Expanse. After the evil organization Protogen tried to weaponize it, the whereabouts of other protomolecules represent huge playing pieces in the larger future of the solar system. In a new exclusive clip for tonight’s episode of The Expanse, Holden debates with the OPA’s Fred Johnson over what to do about the possibility of a new version of the protomolecule existing on Jupiter’s moon of Ganymede.

While Holden and Naomi want to investigate traces of the protomolecule on Ganymede (and ascertain its connection to Venus), their Outer Planes Alliance benefactor, Fred Johnson, doesn’t think it’s worth it. Most of this conflict comes from the second Expanse novel, Caliban’s War, though it played out a little differently onscreen. In the book, Holden and his crew discover a newish thing on Ganymede that seems like the protomolecule once they’re already there for different reasons. But this time, it seems like Holden and company want to take their investigation directly to Ganymede, hinting they may defy Fred Johnson’s orders.

Watch the exclusive clip below and decide for yourself: Is Holden going to go rogue, again?