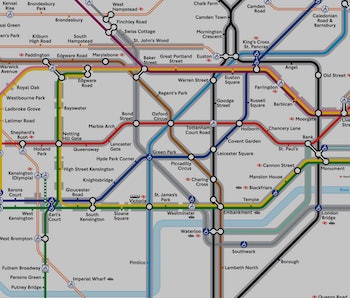 A new subway map for London promises to help travelers with conditions like claustrophobia and other anxiety conditions. Transport for London, the body that manages the city’s public transport, released a map on Wednesday that shows which sections of the network are below ground. The map, which indicates sections of the network that are underground with a grey outline, has been welcomed by charities.

“For those with anxiety conditions such as panic attacks and claustrophobia, we know that travel by the underground can be problematic and challenging,” Nicky Lidbetter, chief executive of Anxiety UK, said in a statement. “This new map is an excellent resource for those wishing to avoid journeys where there are tunnels; serving as a great pre-journey planning aid and increasing access to public transport.”

It sounds counterintuitive, considering the tube network is officially titled the London Underground, but of the 270 stations on the network, more than half are above ground. It’s not just stations in outer London, either: Farringdon, Sloane Square and Edgware Road are all above ground and serve the Circle line that covers central London.

“I sincerely hope that the map will encourage those with claustrophobia and/or panic attacks who have previously avoided this form of public transport out of fear, to re-consider their use of the Tube,” Lidbetter said.

Before publishing the map, the agency spoke with several stakeholders, third parties that have an interest in the agency’s work. Like all tube maps, the information was designed to be clear and concise, meeting strict government visual standards. All the groups that Transport for London spoke to reacted positively to the map. In particular, the National Autistic Society was excited by the opportunity it presented for people to help plan their journey to avoid tunnels.

View a section of the map below:

The tunnel map can also help people ensure that they maintain cellular service when traveling. Cell service has still not arrived in the tube’s deep tunnels, despite years of efforts. A Transport for London spokesperson told Inverse in May that the agency is keen to offer cellular service, as long as it is commercially viable to do so.

The move forms part of a wider effort to make the city’s public transport network accessible to all. The agency has produced a number of specially-designed maps to help people get around, including ones that help people avoid stairs, ones that show step-free access, and ones that show how long it takes to walk between stations above ground.

“Making the Tube network accessible for everyone is one of our top priorities,” Mark Evers, Director of Customer Strategy for TfL, said in a statement. “This new map is just one of the tools we have created in response to feedback from our customers on how we can make the transport network more accessible, making travelling easier and more comfortable for all our customers.”

View the full map as a PDF here.

More like this
Innovation
6.19.2022 6:04 PM
47 popular home upgrades people are making that are under $35 on Amazon
By Christina X. Wood
Innovation
7.2.2022 6:00 PM
Are self-driving cars safe? The tipping point rests on a psychological illusion
By Jean-François Bonnefon and The Reader
Innovation
7.1.2022 10:00 AM
Robots are ready to get touchy-feely
By Sarah Wells
Related Tags
Share: