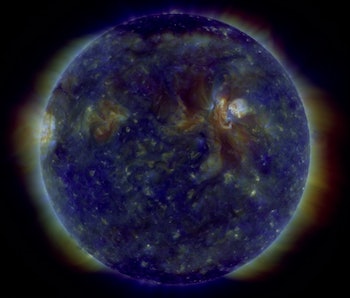 In addition to being the Milky Way’s source of light and energy, the sun is also our galaxy’s earliest musical instrument. Astronomers use its music to figure out what happens in the star’s interior and have just uncovered information that can help explain some recent unusual solar activity.

“The sun is very much like a musical instrument,” said Professor Yvonne Elsworth, an author of the new research, which was just published in the Monthly Notices of the Royal Astronomical Society, “except that its typical notes are at a very low frequency — some 100,000 times lower than middle C.”

These notes are created by turbulence in the outer convection zone, a layer in which energy currents slowly flow toward the surface. “The Sun acts as a natural cavity to trap [that] sound,” explains a press release.

Scientists analyze the sound waves to deduce how the sun’s internal structures and kinetic energy work. The technique is called “helioseismology,” and it’s Professor Elsworth’s specialty.

One question Elsworth is trying to answer with helioseismology is why the sun’s recent period of minimum activity (a point called the “solar minimum” in the sun’s 11-year cycle) has been unusually long and quiet. “It will be interesting to see if the minimum of this current cycle is extended in the manner of the previous one or if it will soon be back to the conditions of the past,” she says. “However, if it is a normal minimum it will also be interesting to ask why the previous one was unusual.”

Elsworth’s research suggests that the reason for this especially low minimum is that the outer layers of the sun’s magnetic field have thinned in recent years. What might be the long-term implications of this thinning?

“We do not know,” Elsworth tells Inverse. “It may be a transient phenomenon or it may be a key to understanding the activity cycle and its variation. Only time will tell.”

The solar minimum won’t occur until about 2019, so we’re still a couple of years away. When it happens, it will help scientists diagram Earth’s own magnetic fields.

More like this
Science
6.30.2022 10:45 AM
These 5 objects could be Webb's full-color first images
By Kiona Smith
Science
6.17.2022 2:00 PM
Look! Cosmic dust swirling around these baby stars might become a future planetary system
By Doris Elín Urrutia
Science
6.23.2022 6:15 PM
Look! Hubble image shows a dazzling star cluster near the center of the Milky Way
By Kiona Smith
Related Tags
Share: