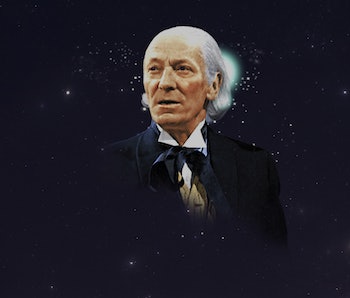 In the final moments of the latest season 10 finale of contemporary Doctor Who, incumbent 12th Doctor (Peter Capaldi) was confronted with a face he hadn’t seen in a long, long time: the original 1st Doctor; first played by the late William Hartnell, and now played by David Bradley. But if we’re honest, this probably created more bewilderment than excitement for most fans. As retro-Doctor Who incarnations go, few would cite Hartnell’s grumpy grandpa Doctor as their preferred Time Lord, much less name favorite episodes from his tenure. And because Hartnell’s 1st Doctor era is so old-school, it’s hard to know what exactly one needs to watch in order really understand what this version of the character was all about.

Because retro-Doctor Who was formatted as mutli-part serial episodes, recommending viewing lists for any of the original Who stuff can get daunting quickly. With that in mind, here’s a hack. The following is a list of four William Hartnell 1st Doctor episodes. Added up, this is less than two hours. And at the end of that two hours, you’ll feel like an expert on the 1st Doctor.

(Note: all the following episodes — except one — are available on the streaming service Britbox.)

All classic Doctor Who lists will tell you to start with this episode. But few mention that the crazy facial expressions from Hartnell’s 1st Doctor are the real reason. Witness in this episode, the birth of the weird David Tennant teeth-clench faces!

But in, all seriousness, the first part of “An Unearthly Child” is great precisely because it is really, really weird. By focusing primarily on the point-of-views of school teachers Ian and Barbara, the very first Doctor Who ever creates a spooky and exciting mystery about a strange old man living in junkyard with this granddaughter. And as wonderful as this set-up is, the subsequent three parts of this serial aren’t as great. Watching this first episode gives you the flavor Doctor Who in 1963, and from there, you can jump ahead if you want.

Containing William Hartnell’s most famous speech as the Doctor, this episode was huge. After thwarting a Dalek invasion of Earth (title gives that one away) the Doctor leaves his beloved granddaughter Susan behind, forever. It seems Susan has fallen in love with hunky guy named David, and the Doctor very much wants her to live a life of her own. It’s a touching moment played tenderly Hartnell, and in almost every way, defines the bittersweet nature of the Doctor’s constant curse of saying goodbye to the people he cares about. “One day I shall come back. Yes, I shall come back,” he says. “Until then, there must be no regrets, no tears, no anxieties. Just go forward in all your beliefs and prove to me that I am not mistaken in mine.” Peak Doctor Who tears, circa 1964.

After the departure of school teachers, and OG companions Ian and Barbra from the TARDIS, the Doctor is hanging out with Vicki, contemplating where they’ll go next. Soon, they are joined by new companion Steven Taylor and everyone winds up in the year 1066 AD. This episode is notable for a lot of reasons. It’s the first story to take place after all the Doctor’s original companions have ditched him, a fact which he discusses with Vicki in the opening moments. It’s also the first time that the Doctor encounters another Time Lord, this time in the form of character named the Monk. There’s a great scene at the end of this episode in which the Doctor is investigating what seems like a legit monastery, complete with chanting monks. But, when the Doctor finds an anachronistic phonogram, all is not what it seems. Fans of the Matt Smith era might find the beautiful and haunting imagery in this one to be reminiscent of both “The Bells of St. John” and “The Crimson Horror.”

Unless you somehow got a copy of the original film in 1966, you can’t actually watch the last part of William Hartnell’s final Doctor Who adventure, at least not in its entirety. Infamously, the BBC didn’t save a lot of the master recordings of old Doctor Who episodes, meaning several serials from the 1st Doctor William Hartnell era, and the 2nd Doctor Patrick Troughton era are lost to time. The most relevant of these stories is without a doubt, “The Tenth Planet,”; a four-part serial that introduced the Cybermen and had the Doctor “regenerate” for the very first time, even though they didn’t call it by that name back then.

Even though you can’t watch the original “Tenth Planet” on Britbox or any other streaming service, you can find the 2014 offical animated restoration of the episode. In fact, animation studio Planet 55’s restoration of this episode is haunting and excellent. The subsequent — and also missing — Patrick Troughton serial “The Power of the Daleks” was similarly restored in 2016. You can watch all of the animated “Tenth Planet, Part 4” here. And if you just want the regeneration scene, it’s below

The next Doctor Who Christmas Special, in which the 12th Doctor crosses paths with the 1st Doctor will likely take place during the third episode of “The Tenth Planet.” The episode will air on Christmas Day December 25, 2017 on the BCC and BBC America.