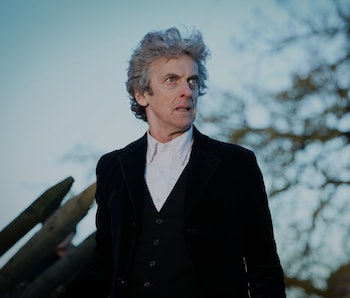 After battling Cybermen and dealing with Missy and the Master, the 12th Doctor will have something even crazier happen. Early reviews of “The Doctor Falls,” all claim the 10th season finale ends on a big cliffhanger.

Possible spoilers ahead for the Doctor Who season 10 finale.

On Friday, spoiler-free reviews of “The Doctor Falls” from Doctor Who TV and Radio Times both teased a “massive cliffhanger,” is waiting for fans at the end of the upcoming 60-minute long episode. Since the last episode — “World Enough and Time” — ended on cliffhanger, what could this next plot twist be all about. With just a little bit of digging, all signs point to to the 12th Doctor’s regeneration setting up the Christmas special in which he’ll come face to face with the very 1st Doctor.

The events of “World Enough and Time” and “The Doctor Falls” are linked with the origins of the Cybermen in the 1966 William Hartnell 1st Doctor adventure “The Tenth Planet” Because of this, a crossover into the 1st Doctor’s time stream already seems likely, and is made even more convenient by the fact that in real life, the 1st Doctor is absent for all of the action in the third part of “The Tenth Planet.”

At the time, William Hartnell was too ill to film the scenes, but now, this fact could be used as a way for the 1st and 12th Doctor’s to spend some time together without violating the canon of the original episode. The 1st and 12th Doctor meeting also neatly solves the plothole of all the Doctors knowing that they had to save Gallifrey in “The Day of the Doctor.” Again, the 1st Doctor can now totally fly his TARDIS with Capaldi during his tricky “Tenth Planet” absence.

Obviously, William Hartnell has been deceased for quite some time, but he was played by David Bradley in the popular 2013 docudrama “An Adventure in Time and Space.” Because of this fact, fans have been speculating he could return to play the 1st Doctor outright at any time. Bradley seemed to slyly hint this was in fact happening back in April, and as of Thursday, leaked set photos almost completely confirm that the 1st and 12th Doctors will in fact meet.

Will the cliffhanger in “The Doctor Falls” include Bradley as the 1st Doctor? That, right now, is the big question.

The Doctor Who season 10 finale, “The Doctor Falls” airs on Saturday July 1 at 9pm EST on BBC and BBC America.