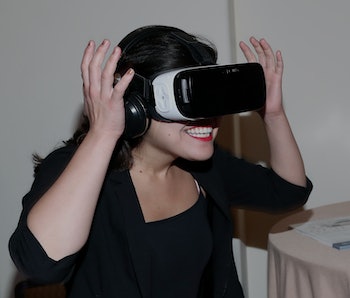 It’s hard to get started as an independent creator in any artistic medium, but the high cost of computing power and other hardware make it especially difficult to gain traction in virtual reality development. To some degree, the nascent industry suffers from a disconnect between developer and a growing list of eager investors, and now a startup called Kaleidoscope has unveiled an initiative that it hopes will bridge that gap and bring financing to some of the most promising VR creators in the country.

The Bay Area company announced on Thursday the opening of a platform that connects VR developers with a growing list of financiers, distributors, and festivals. Founded in 2015 as a traveling showcase of the most compelling independent virtual reality projects, the company has morphed into both a fundraising facilitator and executive producer for new VR experiences. The new platform, which has been quietly helping developers connect with financiers for the last six months, will now be available to the general public.

“We have a review committee that considers every project submission we receive,” René Pinell, the company’s co-founder and CEO, tells Inverse. “In terms of our selection criteria, we look for projects that show a mastery of both the creative and technical sides of virtual reality. We value craftsmanship and originality. We select projects that show us something new.”

Pinell estimates that the bare minimum cost to make a decent VR experience is about $50,000, so while on the road, funding was always the top problem faced by aspiring creators. The numbers bear that out; thanks to that traveling road show, and six months in beta, Kaleidoscope now receives hundreds of submissions per month. The committee only selects about ten per month, which makes it much more competitive than most funding platforms; back in 2012, Kickstarter said it was accepting about 75 percent of submissions.

Kaleidoscope is especially selective because instead of offering creators the tools to raise money from the internet at large, chosen projects are introduced to a community looking to invest in VR projects. In some ways, it’s more like Silicon Valley’s AngelList than Kickstarter.

“Kaleidoscope takes zero percent of the funds raised, and accepted work is promoted to our growing network of funding sources, distributors, and festival curators,” Pinell says. “Any leads generated will be owned and managed by the creator. Kaleidoscope will have no ownership or financial stake in the project.”

Instead of taking a cut from the creators, the platform charges prospective financiers $199 a month for access to the growing list of projects. Kaleidoscope promises “white glove” service for high-end clients, which will include helping to facilitate connections and invitations to exclusive events. Pinell told Inverse earlier this year that Kaleidoscope had already identified over 120 different major sources of fundraising, including VR headset makers themselves.

There are over 100 projects already on the list, some of which are already complete.

For the most part, Kaleidoscope will claim no stake in any of the projects, but a few have signed on to allow the company to serve as an executive producer. “These projects we are very involved in all aspects of development,” Pinell says.

More like this
Gaming
8.3.2022 6:00 PM
We Met In Virtual Reality offers a hopeful but flawed vision of the metaverse
By Willa Rowe
Innovation
7 hours ago
Scientists at CERN have discovered too many particles for physics to keep up
By Harry Cliff, Tim Gershon and The Conversation
Innovation
3 hours ago
Mars City: 3 Red Planet resources could forge a critical building material
By CAROLYN COLLINS PETERSEN and Universe Today
Share: