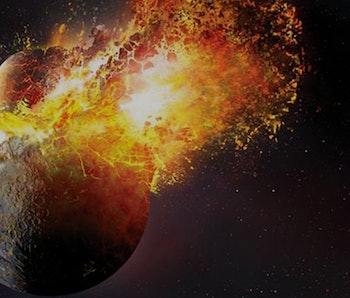 On Friday, the world will come together once again to celebrate Asteroid Day, a time to recognize simply the scientific and technological potential in a more in-depth study of asteroids, but also in spreading awareness of a better understanding for the threat asteroids pose to life here on Earth. Don’t let the fact that Queen Guitarist Brian May — who’s also a stellar astrophysicist in his own right — fool you into believing Asteroid Day is all games and play.

A key tenet of Asteroid Day revolves around the discussion of planetary defense — protecting Earth from near Earth objects (NEOs) zipping around the solar system, some big enough to wreak havoc on populations worldwide should they collide with this blue marble.

But the notion that an asteroid could crash into Earth and destroy everything is nothing new. Why is it only recently that the scientific community as well as public policy officials have started to interest themselves with trying to predict and mitigate such disasters?

Ed Lu, a former NASA astronaut, is the co-founder and executive director of the B612 Foundation, a nonprofit dedicated to understanding planetary defense with regards to NEOs. During a conference call with reporters on Thursday, Lu recalled going to the 5th IAA Planetary Defense Conference in Tokyo this past March, and having the same conversation with several different people. “We all remarked at how far the field has come in roughly the last 10 to 12 years,” he said.

A decade ago, the conversation revolved around “how do we get politicians and the general public to take the issue of asteroids seriously?” he said. “There was very little discussion of that now, because it’s apparent that the idea of preventing asteroid impacts now has become mainstream.”

The Chelyabinsk meteor event, in which a 20-meter asteroid hit Russia on February 15, 2013, was a major wakeup call for much of the world. “The subsequent media coverage of that, as well as discussions with space agencies and halls of government over the years changed the equation,” said Lu.

He also pins the shift in perspective to another factor. “You can’t prevent an asteroid unless you have found and tracked it and you know where it is first,” said Lu. “You need to know of its existence.”

About 10 years ago, scientists were really only concerned with finding and tracking asteroids about the size of one kilometer in diameter or larger — the ones which would really be capable of ending human civilization. And we’ve managed to identify and catalogue roughly 90 percent of these type of objects.

“Obviously [this is] a great first goal,” said Lu. “But it’s clearly not enough.” Chelyabinsk and other events have highlighted that much smaller objects can still threaten humanity in other ways — smaller devastation, sure, but ways which still threaten the livelihoods of entire populations.

The scientific community is now gearing towards a goal of cataloguing objects around 140 meters and larger. Lu calls this another good goal, but cautions, “that’s not enough either.” Even smaller asteroids are capable of destroying large swaths of dense cities around the world.

How big might those asteroids be? Probably around 30 to 40 meters in diameter.

Luckily, the entire field has made an extraordinary progress, not just in terms of tracking, but also in deflecting objects with a trajectory that puts it on a collision course with Earth. At the Tokyo meeting, Lu recalls, “[experts] were talking about even which kind of launch vehicles they could use,” and other very detailed aspects in asteroid impact mitigation.

It’s not just scientists who are more focused on planetary protection. The public’s awareness of the threat of asteroids has also swelled considerably in recent years. Lu is encouraged to see that the public, for the most part, isn’t suffering from irrational fears that we’re about to live out a Michael Bay movie and shoot Bruce Willis into space to save the world.

“I don’t tend to think of [asteroids] as a cause for concern, but as…an opportunity to do something important — which is to safeguard the Earth over the long term,” he said. “We do need to solve the problem over the long term, but the overall risk in any given year is small.

“The knowledge of the existence of the threat is becoming very widespread. It’s something that’s in the public domain right now.”

Lu has high confidence the world could, in the next 10 years or so, see a robust catalogue of asteroids down the size of 30 meters, as well as real testing of deflection systems. “There’s still a lot of great things and interesting things going on right now. It’s great to see.”

More like this
Science
7.28.2022 7:15 PM
Webb could uncover how tiny, icy objects at the Solar System's margins form planets
By Jeff Nagle
Science
7.25.2022 1:30 PM
The Webb Telescope will drop everything to observe the next interstellar object
By Darren Orf
Innovation
7.23.2022 1:30 PM
50 years ago, a powerful satellite overcame opposition and changed how we understand Earth forever
By Allie Hutchison
Related Tags
Share: