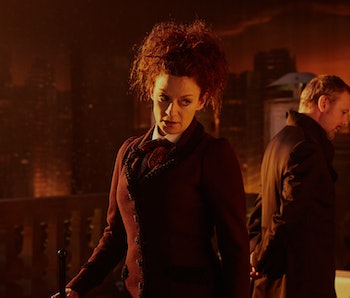 The end of Doctor Who Season 10’s penultimate episode saw the Master and Missy teaming up with the Mondasian Cybermen to confront the Doctor, but it looks like Missy might rebound in the finale to stand with the Doctor and face her former self. That’s right, it’s a Master vs. Missy showdown in “The Doctor Falls,” which might just lead to the death of three Time Lords in one episode.

In an introduction from Peter Capaldi and Pearl Mackie — the actors behind the 12th Doctor and Bill Potts — for the season finale, Mackie mentions that “the Master and Missy go head-to-head.” So it looks like the Master-Missy team-up from the end of “World Enough and Time” will be short-lived.

Though Missy might not necessarily side with the Doctor, she’ll definitely face her previous incarnation in battle, which will probably lead to both of them dying and regenerating.

Here’s the introduction confirming the Master vs. Missy confrontation:

In a previously featured trailer for Saturday’s finale, the Master angrily shouts, “I will never stand with the Doctor!” But Missy looks less resolute as the Doctor pleads, “Stand with me. It’s all I’ve ever wanted.” Missy wavering in her commitment to evil has been her arc over the past several episodes, and an epic confrontation with her former self, the Master, would bring that arc to a satisfying conclusion.

One way to do just that would be to have her turn good just long enough for her and the Master to kill each other, leading the Master to regenerate into her and Missy to become somebody entirely new — which would coincide with actress Michelle Gomez’s departure from the show.

Check out a trailer for “The Doctor Falls” in which Missy seems to rejoin the Doctor’s side:

“The Doctor Falls” will air this Saturday, July 1 at 9 p.m. Eastern on BBC and BBC America.