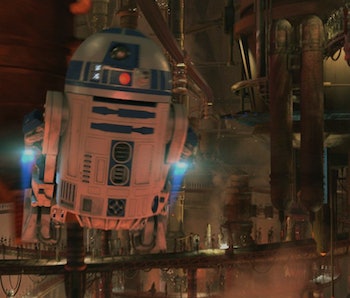 The most lovable droid in the galaxy is also the most valuable: just as Darth Vader would have done anything to get his hands on R2-D2 in the original Star Wars, a real R2-D2 is officially worth more at auction than both Vader’s helmet and Luke Skywalker’s lightsaber.

On Wednesday, an original R2-D2 prop was auctioned off in Los Angeles by the auction house Profiles in History. The droid went for a whopping $2,750,000. According to the AP, this partiuclar R2 unit was “was compiled from parts used throughout filming of the original trilogy,” meaning this was probably the most legit R2-D2 someone could purchase.

Notably, R2-D2 seems to be worth more than two other Skywalker family heirlooms. One of Luke Skywalker’s lightsaber sold for $450,000, while Darth Vader’s helmet snagged $96,000. There’s obviously no way [Kylo Re](https://www.inverse.com/article/29962-star-wars-the-last-jedi-episode-8-kylo-ren-scar-rey-anakin-skywalker-darth-vader-lightsaber)n — huge fan of Darth Vader and all things owned by Vader — would agree with these numbers, at all.

But then again, Vader technically owned R2-D2 at one point, too. So maybe the person who bought this R2 IRL was working for Kylo Ren.