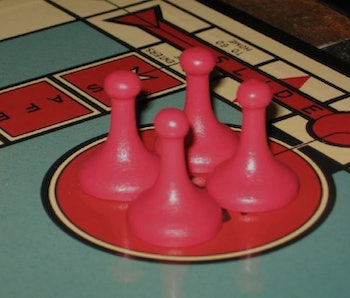 Board game fans love to talk about the ongoing gaming renaissance: More funding goes to tabletop games than video games on Kickstarter; Settlers of Catan is ubiquitous; Brooklyn is full of gaming emporia. And there is a sort of turn-based enlightenment. Where we once went to war, we now create rail lines and operate power plants. New games mean new gamers for a specific reason: The old games didn’t really work.

The classics, mathematically speaking, weren’t really classics. Here are the games you should leave behind in favor of something new.

The trap Sorry! falls into is going all in on luck. The first action of the game, leaving the start zone, relies on pulling a specific card. Players who don’t snag a one or two are left twiddling their thumbs.

There is some hope. A popular variation of Sorry! aims to mitigate this problem. Dealing five cards to each player at the start of the game, for example, brings a bit more strategy to the table (Do I play this card now or save it for later?) while ideally cutting down on too many wasted turns.

Connect Four falls into an uncomfortable category, solved games. If both parties play perfectly, there’s only one outcome: whoever goes first wins. There are 4.5 trillion ways to fill a Connect Four grid and 2 trillion ways to win, as Numberphile shows, but there’s only one opening move to guarantee a win every time — drop your first checker in the middle column. Do that and play smartly. You’ll win every time.

Speaking of games that are over before they begin, Candy Land is a perfect tool for familiarizing youngsters with the concept of predestination - or at least with the idea of good fortune. During a game of Candy Land, a player’s only option is to draw a color-coded card and move to the corresponding tile. There is zero skill (beyond shuffling), only luck of the draw. You might as well just flip a coin 50 times.

Deadline reported in 2012 that Hasbro was in talks with Adam Sandler to star in a Candy Land movie. I think we know how that's gonna turn out.

Munchkin takes itself with zero seriousness, which sets it apart from the average fantasy card game. And it’s hard to be harsh on something that lets you equip gear like the "Kneepads of Allure." On the other hand, repeated games of Munchkin will make one fact clear: The only way to advance is to attack a random monster. If you can't defeat said monster, well, game over. No one trying to win is going to help you so you're just gonna kneel there feeling useless.

Fluxx takes a simple mechanic — draw one card, play one card — and hikes it into a Lovecraftian realm where chaos reigns. Each card played alters the rules of the game, who’s likely to win, and what winning requires. That the game changes so fluidly is a neat concept, but planning your next turn becomes about as prudent as making a sacrifice to Yog-Sothoth. If you’re a fan of gleeful nihilism and hate strategy, this game is perfect for you. It's also super fun if you're drunk.

Only the true megalomaniacs among us have finished a game of old-school Risk. There’s a reason that designers of multiple-hour-long games have, by and large, eliminated player elimination: The twiddling thumbs phenomenon of Sorry! strikes again. Getting knocked out early or watching another player hole up like an angry wombat in Australia can make five-hour games feel even longer. In the Game of Thrones board game, which sparkles at a youthful 12 years old, conquering territories is also the key to victory. But players amass points, rather than straight up annihilating each other, meaning the odds are far greater you’ll all be playing until the bitter end. Makes more sense.

Monopoly has been the object of such board game hate we almost don’t have the heart to poke its corpse. It is the sum of all gamers’ fears: Too long, too random (moves are solely dependent on dice rolls), and almost impossible to win outright. There’s a fairly convincing argument that Monopoly’s immense popularity is the reason why the goal of player elimination ruled American board game design for so long. Sometimes past is bad precedent.

Because Cards Against Humanity has introduced phrases like “Lance Armstrong’s missing testicle” and “Hakuna matata, motherfucker” into more households than anyone ever dreamed possible, there is no reason to play Apples To Apples. It’s like visiting a zoo instead of going on safari. Lions are cool, but you'll miss all the fun explicit stuff.