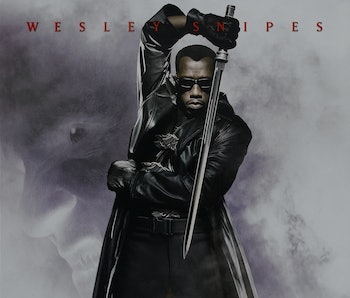 Even before Marvel’s X-Men became a mega-movie franchise, there was Blade. In the late ‘90s and early 2000s, Wesley Snipes starred as Marvel’s semi-obscure vampire hunter Blade in three movies released between 1998 and 2004. In 2013, the rights to Blade reverted back to Marvel, where the character has laid dormant ever since. Now, Marvel Studios boss Kevin Feige says Blade could join the Marvel Cinematic Universe, “someday.”

This week, in an interview with JoBlo, Kevin Feige revealed that Blade’s return to live-action movies will happen “someday, and that the character may be a part of the interconnected MCU. “We think it would be cool,” Feige said. He continued:

“My tenure at Marvel started 17 years ago, and there were two things that sort of launched the modern era. One was X-Men, which was the first thing that people said, ‘Oh, there’s life here.’ But a few years before that, there was Blade. A character nobody had heard of at all, had only appeared in a few issues of Tomb of Dracula or something, turned into a big franchise. That was always a great lesson for me, where you go, ‘It doesn’t matter how well known the character is, it matters how cool the movie is.’ Which, many years later, would be the reason we do Guardians of the Galaxy, Doctor Strange. I think Blade is a legacy character now, and I think it would be fun to do something with him one day.”

In hindsight, it’s fascinating how there even was an entire Blade movie franchise. The first Blade, directed by Stephen Norrington, preceded the watershed movies that were Bryan Singer’s X-Men and Sam Raimi’s Spider-Man. Blade II was directed by auteur Guillermo del Toro, who was a few short years away from directing his breakout picture Pan’s Labyrinth. Then, in 2004’s Blade: Trinity, directed by David S. Goyer, Ryan Reynolds played a supporting role a whole decade before his career resurged in 2016’s Deadpool.

The character has also appeared on TV twice: First in Blade: The Series (starring rapper Kirk “Sticky Fingaz” Jones) that aired on Spike in 2006, and then in the 12-episode Blade anime starring Harold Perrineau in 2011.

In 2013, Blade and other characters predominantly associated with the Marvel Knights imprint — Daredevil, the Punisher, and Ghost Rider — returned to Marvel Studios custody. All of those characters, except for Blade, have since returned to live action, mostly on Netflix and on Marvel’s Agents of S.H.I.E.L.D.