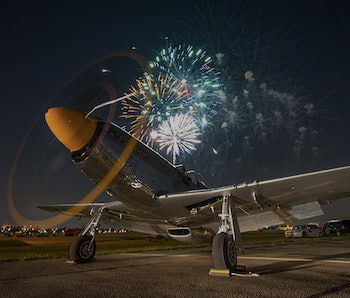 In Texas, stereotypes suggest that fireworks and July 4 are not something to mess with. The stereotypes are true, but with a twist: the biggest fireworks show in the state isn’t in a big city. Instead, it’s in a small town called Addison, a 13,000-resident suburb of Dallas sandwiched by corporate parks, golf courses, and an airstrip that flies private planes and World War II-era relics in equal measure. Addison Kaboom Town is the real deal, and the amount of explosive force that goes into it is absolutely crazy.

The show itself is on par with the big shows in New York, D.C., or San Francisco, and regularly makes it into top-10 lists with them. That’s not surprising when you blow up 3,500 pounds of fireworks over a 25-minute cavalcade of noise and sound, simulcast on the local 100.3 JACK-FM radio station, to a crowd of hundreds of thousands of Texans who come from all over. A country club four miles away hosts a watch party to see the show, clearly visible over the flat plains of North Texas, and every single one of the city’s 23 hotels sells out over the weekend. Oh, and before that, there’s an entire air show, with Vietnam and WWII-era warplanes screaming overhead.

“It just keeps getting better,” Chad Stanley, Operations Manager at PyroShows, the fireworks company that runs the bang-bang part of Kaboom Town every year. Stanley would know — he tells Inverse he’s worked on fireworks shows for over 16 years, even helping to organize Dubai’s record-breaking fireworks show in 2014.

Stanley says the fireworks are trucked into Addison and set up on four 48-ton custom built flatbed trailers that take weeks to build. Right now, he says, the guys are finishing up the fourth trailer.

On the first of the month, they’ll drive the whole lot into Addison and spend the better part of the next three days setting up the massive load of explosives. It all leads up to the “fun part,” he says, when someone gets to push the big red button and kick the whole thing off.

The crew spends hours listening to the soundtrack for the night, making sure they have their cues down for each of the explosions, which are synced up with a computer. That’s the hard part. On the night of, they sit in their trucks blasting the show’s intro on the radio the same station everyone’s listening to for miles around to make sure it syncs up, then hit the button at just the right time to kick the show off.

Addison has made Kaboom Town a part of its city culture (and business model) for the better part of three decades. Mary Rosenbleeth, the director of public communications for the city of Addison says the show’s name was a riff on the “boom town” phase that Addison went through in the late ‘80s (“They used to say the boom crane was our local bird,” she jokes, because there was so much construction).

Now, the town is a relatively affluent suburb that hosts the corporate headquarters of major companies like Mary Kay cosmetics and major centers for Bank of America and others. Rosenbleeth estimates that up to 125,000 people work in Addison each day, even though the town itself only has 13,000 permanent residents. But the big tourist draw is the town’s events, like the spectacular Kaboom Town.

Kelly Hunter, a spokesperson for Kaboom Town, said the show costs around $300,000 every year, but has an “economic impact” on the city of $3-5 million. It’s also one of the biggest events of the year for the Cavanaugh Flight Museum, which participates in the airshow each year with vintage planes.

This year, the show will start with skydivers and stunt pilots, culminating in a hang-glider shooting pyrotechnics and a vintage air wing of planes including the famous P-51 Mustang.

All told, the show has been going on for more than 30 years. Rosenbleeth said that kids who grew up in Kaboom Town are now bringing their own children to the shows. She’s not sure when exactly the city decided to go all-out on the level of the country’s largest fireworks shows, but along the way, it grew into something huge.

“The show sorta took on a life of its own,” Rosenbleeth said. “It’s a small town but it lives large.”

More like this
Culture
7 hours ago
Lost Never Solved Its Weirdest Sci-Fi Mystery, But This Episode Came Close
By Jake Kleinman
Culture
Feb. 4, 2023
The End of the Cold War Could Have Killed James Bond. Instead, it Made Him Stronger.
By David Grossman
Culture
6 hours ago
Quantum of Solace Remains a Mess, But It Understands What Makes Bond Tick
By Mark Hill
LEARN SOMETHING NEW EVERY DAY.
Share: