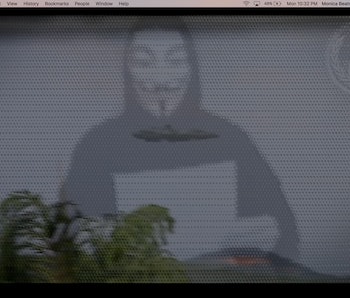 The hacking network Anonymous shared a video last Tuesday that went viral this week; in the 12-minute clip, two masked figures cite declassified FBI documents and public NASA statements as evidence for a completely unremarkable, even conventional, conclusion: NASA may be close to discovering alien life.

Whether or not it was Anonymous’s intention, many viewers wildly misinterpreted the video and assumed that the group had access to confidential information revealing that NASA had already discovered aliens. As it often goes on the internet, that rumor quickly spread.

“‘Mankind is about to discover extraterrestrial life,’” the video begins. “This was stated by the spokesman of the National Aeronautics and Space Administration during one of the last hearings of the Committee on Science, Space, and Technology of the United States.”

You read that right: Mankind is about to discover extraterrestrial life. Anonymous isn’t claiming that this detection has already occurred. So why did people misunderstand?

A confluence of factors is probably to blame. Anonymous is a well-known hacking organization, so viewers who didn’t listen closely may have assumed that the group found its quotes by hacking into NASA and the FBI. And it seems that some viewers misunderstood the statement that NASA is “on the verge” of discovering extraterrestrial life to mean that the agency is on the verge of announcing that it’s already made that discovery.

It doesn’t help that the video plays sourceless clips of “UFO” sightings in the background, suggesting that Anonymous thinks that aliens exist and have already been spotted by humans.

A cynical observer might conclude that Anonymous encouraged all of this confusion to solicit views, especially since the video contains five advertisements.

It’s well-known that many NASA scientists believe they are likely to find life in outer space. That’s why it’s not actually scandalous for Anonymous to say, “NASA is already prepared to announce extraterrestrial life. Protocols are in place.”

If there is life out there, we really might not be far from discovering it. It was less than three decades ago that astronomers first detected a planet outside of our solar system, and now they identify new ones all the time: Just last week, NASA announced the discovery of 219 planet candidates. Our detection tools have never been better, and they’re improving rapidly.

On top of that, scientists often find the ingredients for life in outer space, from Mars to the star system IRAS 16293-2422.

So, it makes sense that NASA’s Thomas Zurbuchen made this statement to Congress in April (another remark that Anonymous cited):

“Taking into account all of the different activities and missions that are specifically searching for evidence of alien life, we are on the verge of making one of the most profound, unprecedented discoveries in history.”

Zurbuchen’s words, while dramatic, don’t indicate that NASA has found aliens. He’s just confident that the agency will do so, and soon.

We’re with him. Anonymous might be, too, but they don’t seem to be with us.

More like this
Science
6.30.2022 10:00 AM
Behold! Curiosity discovers Martian rocks contain an essential ingredient of life
By Allison Parshall
Science
6.22.2022 10:15 AM
Ice could bring an unexpected key ingredient for life in alien oceans
By Kiona Smith
Science
6.28.2022 7:00 PM
Cosmic rays could erase evidence of past life on Mars
By Kiona Smith
Related Tags
Share: