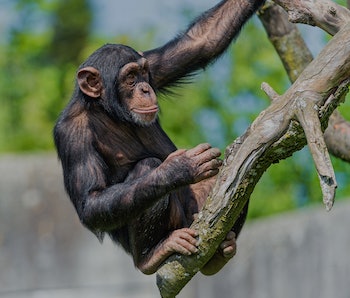 Humans have a reputation as the weaklings of the animal kingdom, and for good reason. It’s not just that we’ve become soft after spending too much time in front of computers and TVs; on a deep, molecular level, we’re simply not built for power and speed.

That’s according to new research led by the University of Arizona’s Matthew O’Neill, Ph.D., published Monday in the Proceedings of the National Academy of Sciences. O’Neill and his team looked at the composition of muscles across different mammal species and found that, while our cousins are built for bursts of exertion, humans are built for endurance. In their analysis, only the aptly named slow loris matched humans in muscular lethargy.

Our flaws are inherent in the very building blocks of our musculature. Muscles are composed of two main types of tissue, commonly referred to as “slow-twitch” and “fast-twitch” fibers. As the name suggests, fast-twitch fibers are responsible for responding quickly — say, when it’s necessary to quickly outrun a hungry lion. Slow-twitch fibers, in contrast, can’t contract as suddenly, but they can use energy more efficiently over longer periods of time.

The muscle composition of our closest living relatives, the chimpanzees, is about two-thirds fast, one-third slow. Humans have the opposite makeup, with just a third of the fast-twitch muscle. That’s an enormous difference, particularly considering that the muscles of every mammal the scientists looked at were overwhelmingly fast-twitch, with the exception of humans and lorises. It helps explain why chimps are, pound for pound, about 50 percent stronger than us, and why we should really avoid taking them on in hand-to-hand combat in a real-life Planet of the Apes battle.

But despite what the study findings have to say about our lack of strength, they also shed light on how we ultimately became the rulers of the animal kingdom. There’s a theory that the evolutionary advantage early humans had over other animals was simply being able to outrun and outlast our prey, and this is much more efficiently done with muscles that are primarily slow-twitch. The idea is that some early hominin figured out a technique called persistence hunting, which involves forcing an animal to run away from you enough times that they collapse, exhausted and ready for an easy kill. Doing this gave us access to red meat, which is a rich source of calories that supports growing brains.

A few African tribes still practice persistence hunting today, and the theory also helps explain why so many humans are obsessed with marathon and ultramarathon running. We may literally have been born for it.