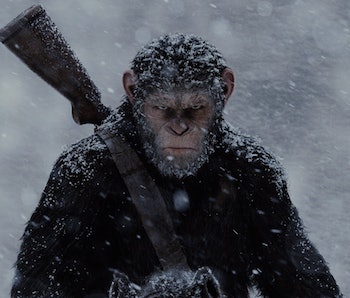 Caesar and his band of intelligent apes go head-to-head with Earth’s remaining humans this summer in War for the Planet of the Apes. In the newest trailer, Caesar declares “we are not savages, apes fight only to survive” as they prepare to defend themselves against the humans, who are equipped with laser-guided automatic weapons and missiles.

Preparing themselves with artillery is a smart move: While chimp war isn’t too far from human war, the Colonel, played by Woody Harrelson is correctly apprehensive about apes being “stronger than we are.”

In a theoretical battle between apes and humans, humans would lose to apes in if it came down to hand-to-hand combat.

In the 1920s researchers compared the strength of seven college football players to two apes; both species were approximately the same weight. With a pull system called a dynamometer the researchers measured the strength of both species and discovered that apes could pull four times the weight that humans could. With two hands humans could pull about 430 pounds, while apes pulled 1,260 pounds.

Why apes are so much stronger than humans has to do with anatomy. According to anthropologist Adrienne Zihlman in the Journal of Human Evolution apes have more muscle mass in their arms than humans do. Apes carry about 16 percent of their total body weight in their arms while humans carry only nine percent. They also have longer muscles fibers compared to humans. Because of these longer muscles, apes have more range of motion and flexibility in their joints. This, accordingly, comes in handy during a fight. With more flexibility, apes can the leverage their arms more to hit harder.

Muscle mass and physiology play only one part of the ape’s strength. According to evolutionary biologist Alan Walker, apes are stronger than humans because the human nervous system developed to prioritize fine motor skills. Walker came to this conclusion because the human brain has more grey matter than the brains of apes — more grey matter means more motor neurons. The increased amount of motor neurons means that humans end up engaging fewer muscles.

Meanwhile, chimps have an “all or nothing” kind of muscle control. Because chimps have fewer motor neurons, each neuron controls a lot of muscles, and they end up using more muscle than they actually need.

In the Planet of the Apes Caesar and his fellow apes are super smart thanks to an artificially created retrovirus called ALZ-113. But retrovirus or not, these apes would also be naturally super strong. If the movie, out this July, comes down to a fight-fight we already know which species will win.

More like this
Science
6.22.2022 8:26 PM
Yes, there are mites living on your face — and they can poop, a new study finds
By Allison Parshall
Science
15 hours ago
Why is my cat scratching furniture? The answer might surprise you
By Tara Yarlagadda
Science
6.27.2022 11:00 AM
Letting your cat go outside could spread “life-threatening” parasites — new research
By Amy Wilson, Scott Wilson and The Conversation
Related Tags
Share: