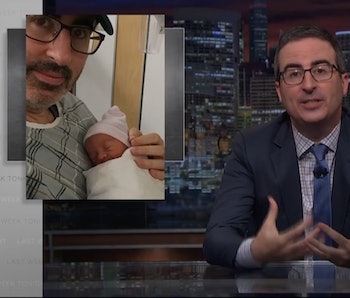 On Sunday’s episode of Last Week Tonight, John Oliver implored science and common sense in debunking the vaccine debunkers, and it got a little personal, too.

Addressing what he called the “hum of doubt” that can’t seem to be turned off across America, Oliver was ready to unpack why a fear of vaccines is on a small — but steady — incline across the country. “Tonight we are going to look at why these fears exist, and what the consequences of succumbing to them can be,” he said.

As usual, Oliver was quick to pick out the villains in the story. President Donald Trump, for example, has continued to preach the hair-brained idea of spreading children’s vaccines out over a longer period of time, with smaller dose.

This approach is in no way based around science, but the bizarre notion has started to trend, and it’s been echoed by one particularly opportunistic doctor named Bob Sears. His “alternative vaccine schedule” — included in his book with the genius title, The Vaccine Book — spreads out vaccine shots over a longer period. It almost sounds like a decent compromise to parents’ fears, but Oliver was quick to point out it’s really not.

“It’s like saying it would be crazy to eat that entire bar of soap, so I’ll just eat half of it,” he said.

Spreading shots out over time puts children at risk of developing diseases in the time they haven’t been immunized, plain and simple.

Conspiracies about vaccines run rampant, like the theory that developed in the ’90s that there is a link between vaccines and the development of autism in children. But this has never been proven. Never. And there are major consequences that go along with this kind of paranoia. In a Somali community in Minnesota for example, a rise in unvaccinated kids led to a 42 percent increase in measles cases, which can lead to brain damage, blindness and deafness in kids.

Vaccination is really not just about parent’s choice for their own child. Oliver stressed an important point that there are a lot of people whose immune systems are too weak for them to get vaccinated.

“By getting vaccinated, you are helping and protecting those who are most vulnerable like sick people, and newborns too young to be vaccinated. Why would you choose not to do that?

This is where things got rarely personal for Oliver. In a touching moment at the end of the segment, the Last Week tonight host held it together to offer one final reality check to anyone who is feeling cautious about immunizing their kids.

“If this helps at all, I have a son, he is 19 months old,” he said. “He was born prematurely following a very difficult pregnancy and I’ve worried about his health and I still worry about his health, a lot. But we are vaccinating him fully on schedule. And if I can overcome the temptation to listen to the terrified shouting of my irrational lizard brain, then I believe that everyone can.”

More like this
Mind and Body
1 hour ago
This everyday behavior is essential to preventing heart disease
By Elana Spivack
Entertainment
6.23.2022 11:00 PM
The Black Phone ending explained: Are the ghosts in Joe Hill's story real?
By Eric Francisco
Culture
6.29.2022 11:30 AM
You need to watch the most subversive sci-fi love story on Netflix before it leaves this week
By Alex Welch
Share: