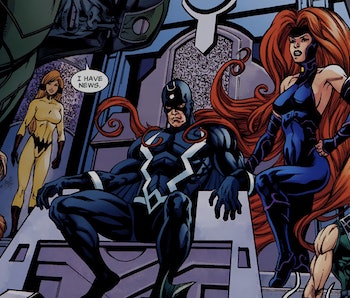 Led by the silent, enigmatic King Black Bolt (Anson Mount), the Inhumans are a race of superpowered heroes in Marvel’s comics, first introduced in 1965 and receiving their first ongoing series in 1975. The Terrigen Mist changed things up for the Inhumans in Marvel’s Infinity event (2013), introducing the NuHumans, a new faction of Inhumans that caused dissent among the original Inhumans ranks. The NuHumans will make an appearance in the first season of Inhumans, adding even more drama to Maximus’s (Iwan Rheon) attempts to overthrow his brother, Black Bolt.

The events of Inhumans will splinter the royal family and land them in Hawaii. In the comics, they have a base on the moon, but it’s unknown if they’ll travel to space in the show or not.

Feeling a bit lost on how the Inhumans fit into Marvel’s timeline? Check out “Explaining the Full Timeline of the Marvel Cinematic Universe.”