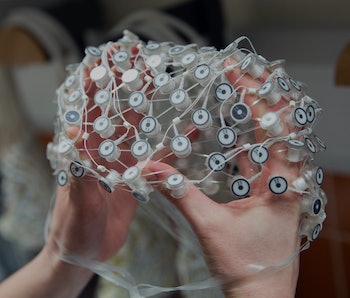 Once we eventually figure out how to connect our brains to computers, most thinking will happen in our synthetic computer brains, futurist Ray Kurzweil said on Friday.

In a post for Singularity University’s YouTube channel, Kurzweil, a futurist for Google by day, said that he expects humans will be able to back up our brains to the cloud.

He has predicted that the singularity, the moment when technology enters a cycle of runaway advancement beyond human control, will occur by 2045. This new era will change the human brain. Instead of being stuck with a limited number of biological brain functions, the singularity will allow us to directly experience the benefits of the law of accelerating returns. Eventually, all our thoughts will happen in the computers merged to our brains.

The neocortex is the region of the brain associated with human mental functions. Kurzweil pointed out that although the human brain is quite large, it cannot get bigger because childbirth would become impossible. This has limited improvements to the human brain, he says. “Now technology is going to pick up what happened two million years ago. This additional neocortex that’s synthetic that will be in the cloud, that won’t be a one-shot deal, that’s going to continue to expand,” he says.

Think of the brain as a smartphone

This is where the law of accelerating returns comes in. Since our biological brains don’t expand in power, and our synthetic ones will, eventually most of our thoughts will occur in the synthetic parts of our brains.

“At that point we will be a kind of hybrid, but the hybrid has largely become sort of cloud based,” says Kurzweil. “Our thinking will be largely in the cloud.”

More like this
Science
19 hours ago
Thomas Oxley Wants to Transform Our Brains’ Relationship With Computers Forever
By Claire Maldarelli
Gaming
Jan. 27, 2023
What we know about every Honkai: Star Rail character so far
By Jess Reyes
Science
Jan. 21, 2023
Plague study complicates a commonly held belief about the Black Death
By Samuel Cohn, Philip Slavin and The Conversation
LEARN SOMETHING NEW EVERY DAY.
Related Tags
Share: