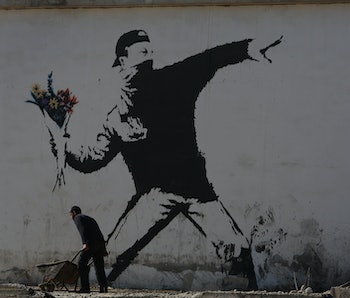 It’s hard to be famous and anonymous, but for almost three decades the graffiti artist Banksy has managed to pull it off. But, it appears that we may finally know Banksy’s true identity, thanks to a slip of the tongue.

On Tuesday, producer/artist/actor Goldie appeared on Scroobius Pip’s podcast, Distraction Pieces, where he discussed the street art scene’s relationship with the art world. Goldie, a graffiti artist in his own right, remarked that mainstream art was cashing in on Banksy. That’s when he might’ve revealed the mystery artist’s true identity.

“Give me a bubble letter and put it on a T-shirt and write ‘Banksy’ on it, and we’re sorted,” he said. “We can sell it now. No disrespect to Robert. I think he is a brilliant artist. I think he has flipped the world of art over.”

Wait a second — who is Robert? Banksy sleuths think that the Robert Goldie mentions is Robert Del Naja, a graffiti artist and founding member of the UK band Massive Attack. Del Naja’s name has long been bandied about as a suspect for Banksy’s true identity. In 2016, a British journalism student tracked where Banksy’s pieces were popping up around the world and found they coincided with Massive Attack’s tour dates. Del Naja denied that he was Banksy at the time, saying the famous mystery artist was just a friend. Other theories posit that Banksy is more than just one person, but Del Naja is the head of the snake.

Goldie and Del Naja have been friends for a very long time, and both came up through the same street art scene, so it’s conceivable that Goldie did just spill the beans.

Metro cheekily notes that after Goldie mentioned Robert’s name, he paused for a beat and then switched the topic to jazz music. Oops.