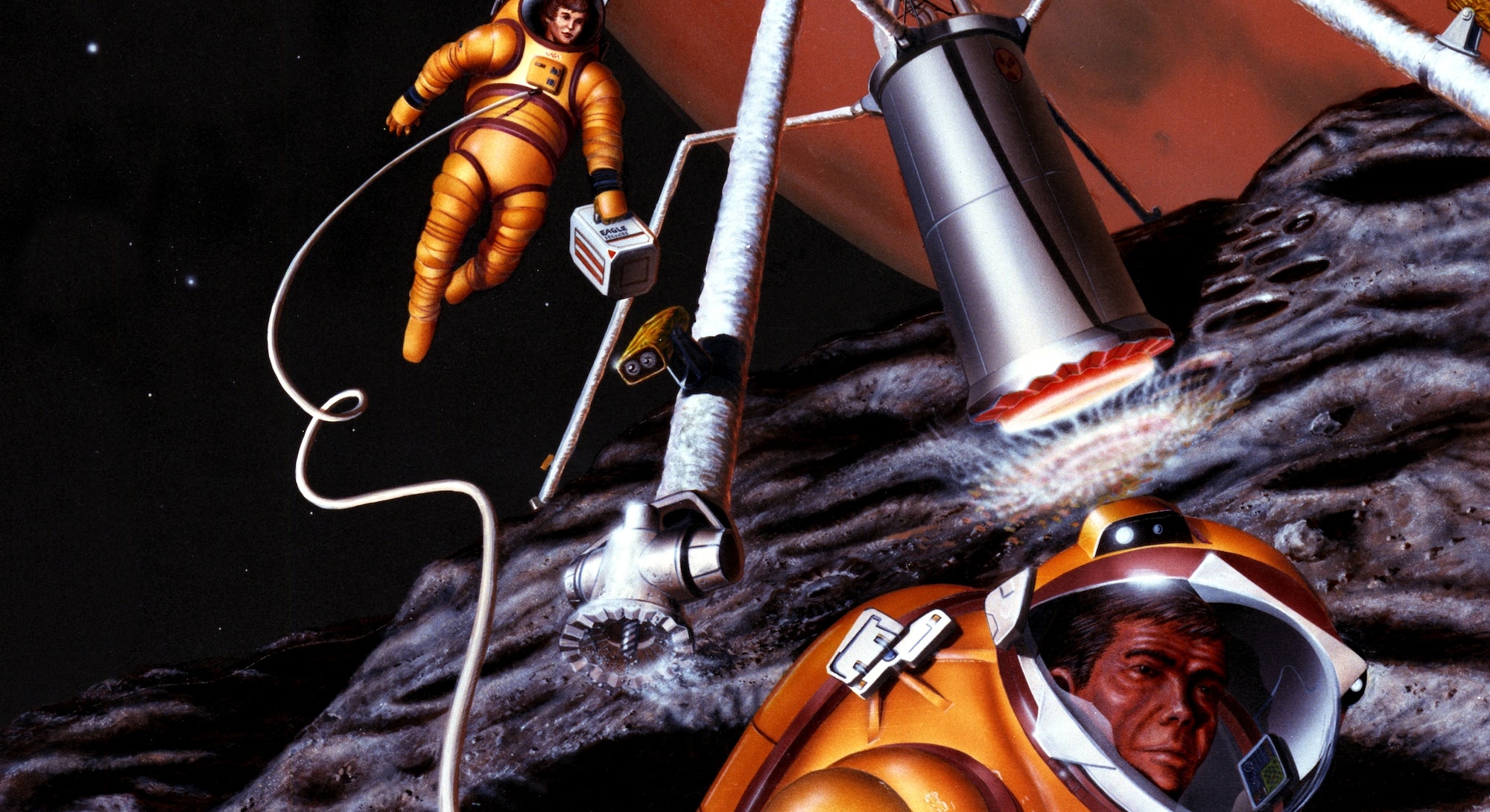 Broadly speaking, there are basically two ways we might land humans on the red planet. There’s what the new kids on the block want to do: fly directly to Mars and land on it, without the fuss of placing a bunch of infrastructure in between. This is the SpaceX way, and for the most part, CEO Elon Musk and his team have elected to do this all on their own, without assistance from NASA (apart from some logistical consultation on the first few Red Dragon missions). That’s partly why SpaceX thinks it can put the first humans on Mars by around 2026, years before NASA’s 2030 projections.

Not everyone is so brash, and fewer parties can afford to act that way. “We as a company don’t have those resources to commit to those kinds of efforts,” Mike Fuller, an engineer at Orbital ATK, tells Inverse. And that’s why there is a second option: a slow route.

Enter Phobos, the Martian moon that could serve as not only a pit stop on the way to Mars but a permanent outer base.

Hoppy Price, the chief engineer for NASA’s robotic Mars Exploration Program, tells Inverse that most recent designs for Mars architecture feature a mission to Mars’s orbit, meaning a stop on its moon Phobos, before the big moment when humans put their boots on red Martian soil.

In 2015, Price led the design of a hypothetical “minimal architecture” plan for NASA’s pursuit of Mars, resulting in a 2015 paper published in the journal New Space that suggests spending up to a year in Martian orbit, and utilizing Phobos as a stop-over beforehand.

Boeing, Lockheed Martin, and Orbital ATK are taking cues from NASA’s Apollo program, seeking to implement a step-by-step, incremental approach to establish a presence not just on Mars but around it as well.

“In our view, it gives us a better chance to become familiar with the system and a more managed approached to the risk of the mission,” Matt Duggan, an engineering manager at Boeing, who specializes in space habitat design, tells Inverse.

All three companies have drafted a variation of this idea that differs in terms of how long a crew spends at Phobos, what kind of work it would accomplish, and how close it might actually get to the moon (whether it would stay in orbit, or attempt a landing, or both). There’s also the moon Deimos to consider.

Nevertheless, Phobos is an important part of each company’s Mars plans. Phobos is a strange rock in itself. It’s probably going to fall apart within 40 to 70 million years, and it’s a misshapen little gem we know little about.

“We don’t really know where [Phobos or Deimos] came from,” Tim Chichan, a space exploration architect at Lockheed Martin, tells Inverse. “There are theories that they were captured asteroids, that they have a similar origin to Earth’s moon [in which they were produced by a massive collision to the host planet], that they were born out of an accretion disk of dust around the planet.”

Chichan also notes that Phobos and Deimos can act as proxies for collecting Martian samples for scientific analysis. So, the scientific reasons for going are already embedded in the rock.

There are still two major advantages for going to Phobos for the sake of human exploration.

The first advantage has to do with radiation. “While the crew is at Phobos, their radiation dose rate would be cut roughly in half,” Price explains, because as it makes its way around the far side of Mars, it would be shielded by the red planet itself from the cosmic radiation being emitted by the sun. Space radiation is still a major issue that threatens the success of any mission to Mars, let alone the future of deep space exploration for the human species. Fuller calls Phobos a “180-degree radiation shield,” which reduces risk to the human crew that is tasked with residing in the Martian system before heading to the planet.

The other main advantage is that setting up a temporary home at Phobos gives explorers an opportunity to check out the Martian system and get used to a new spot of the solar system humans are trying to call home.

A Phobos mission might also counterintuitively speed up a landing on Mars. “In theory, you might save time and money on paper,” Chichan says. “But what we find is that there are big gaps left behind in not doing something.”

The Phobos mission would basically help to fill in some unknowns, which serve to provide clarity about what the Mars team needs to do to set up the foundation for a sustainable outpost.

Although Phobos is too small for testing out entry-descent-landing technologies relevant to Mars, the low gravity is perfect for testing how humans will interface with asteroids and other low-gravity bodies, which could be key to giving future asteroid-mining parties a glimpse as to what they’ll need to chomp into a space rock and pull out valuable resources.

“These technologies will be directly applicable to the commercial exploitation of space,” says Fuller. “We see those as being things that developed in the public interest,” and Phobos can serve as a grounds for testing and validating them.

The low gravity means that Phobos isn’t actually that much more different than the Martian orbit, either. Exploration teams can utilize the same habitat architecture for both environments. There’s one terrifying scenario, though. The low gravity means staying on Phobos could be difficult. A single wrong move could set you off into space, heading for the Martian atmosphere and potentially burning up.

“You don’t really land on Phobos — it’s more like a docking,” says Duggan. “You cozy up to it.” That’s why he avoids the terms “orbit” or “landing” when it comes to Boeing’s plans for Phobos.

So if you’re going to go to Phobos, how do you stick around? Duggan mentions one proposal by Boeing to use a claw-like anchor to keep vehicles tethered to the orbit. Chichan says Lockheed Martin’s design might be a touch-and-go pogo system, similar to what NASA is using right now for the OSIRIS-REx mission (on which Lockheed helped work). NASA’s now-cancelled ARM mission would have used a series of spider-like metallic legs to affix the spacecraft onto the rock, and Fuller suggests this may be one strategy for Orbital ATK to use, among others.

Nevertheless, Phobos is still not a well-known body. There’s no telling whether it’s really dusty, really rocky, or something of a mix. “We haven’t looked at it at that great a detail yet,” says Fuller, and a robotic mission would probably first be launched to Phobos to get a better understanding of the geology.

All of this work might seem like at least a few generations away, but Duggan emphasizes “we have most of the technologies we need already developed. We know what we’re doing, and it’s not that much different from what we have done before.”

Phobos first, Mars next, and then the universe?