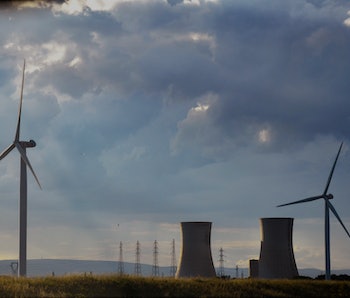 As has been reported a lot recently, the coal industry is dying: jobs are in decline as alternative energy sources are more easily available to the masses, and everything from windows to roofs has become more energy efficient. So while technology is killing the coal industry, so are competitors of coal, which still accounts for an astounding 40 percent of electricity worldwide.

Enter a study paid for by two environmental groups — the American Wind Energy Association and Advanced Energy Economy — and conducted by Analysis Group, a consulting firm, timed to come out ahead of a competing Department of Energy study, and the stage is set to answer the question: What is killing coal? The answers will either be depressing (business-killing policies!) or hopeful (better tech and market competition), or perhaps both.

First up, the private study results released Tuesday found that the decline of coal and nuclear plants in the United States has two main causes: the relatively low cost for natural gas, and the fact that electricity demands have not increased. Bad news for the DOE.

Coming soon will be a competing DOE study ordered by Rick Perry, former Texas governor and head of the Department of Energy. Back on April 15, he called for 60-day review of the U.S. power grid, to determine if polices passed during the Obama administration accelerated the death of coal. The political hypothesis was that Obama killed it.

According to the study released this week, though, Perry and his boss, President Donald Trump, are wrong. Turns out natural gas adoption killed coal in America, not Obama-era pro-solar and wind policies.

There’s no official date for when the Department of Energy study is due out, but 60 days were up on June 14. It’s expected to come out this month.

It appears that the pressure is on for Perry, because the death of coal doesn’t line up with reasons offered by Republicans. It’s actually competition.

“This is a natural consequence of market competition,” says Susan Tierney, advisor at Analysis Group. “Low natural gas prices, technology changes, and flat demand for electricity have been putting financial pressure on and leading to the retirement of older, less economic power plants.”

“The evidence does not support either hypothesis” responds Analysis Group in its report summary, in direct response to Perry’s two questions.

It’s not that renewables have become so cheap that they’re killing coal, it’s that our technology has improved so natural gas is having an economic renaissance. It was the financial pressure from natural gas costs, which dropped and stayed low starting in the early 2000s, that delivered coal’s death blow.