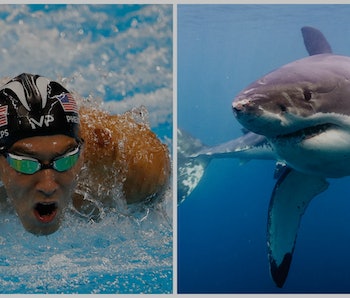 This year’s Shark Week marks a turning point in the relationship between humans and sharks. Throughout history, our fear manifested as reverence for the sharp-toothed fish, but recently, some audacious human dared to ask: Could humans and sharks ever be physical equals? To put the relationship to the test, 23-time Olympic gold medalist Michael Phelps, history’s fastest water-faring human, will race a great white shark on July 23.

“Wow, will he get his butt kicked,” laughed Chris Lowe, Ph.D., the director of the Shark Lab at California State University, when Inverse told him about the Discovery Channel’s “monumental” event, entitled “Phelps vs. Shark: Great Gold vs. Great White.”

“It’s just plain old physics. As good as he is in the water, he’s not even as close to being as hydrodynamic as most marine animals.”

It may seem, at first, that Lowe is being too dismissive. After all, much has been said about Phelps’s unbelievable efficiency in the water. In 2008, Scientific American’s interview with H. Richard Weiner, Ph.D., a former University of Wisconsin-Milwaukee sports physician, revealed that Phelps’s masterful “stroke mechanics” — the amount of water displaced with every stroke — accounts for his unprecedented speed. Other scientists have pointed out that his enormous arm span, long torso, short legs, and huge lung capacity also bring him as close to being a fish as is humanly possible. At his peak, Phelps can swim at speeds of up to 6 miles per hour, which is insanely fast. But Lowe argues that even if Phelps could reach the same speed as a great white, there are plenty of other factors that would guarantee that he would lose.

“Michael’s in pretty good shape. I’ll give him that credit,” he says, noting that great white sharks usually swim at speeds of 20 to 25 miles per hour. Speed aside, he says, the more important factor to consider is stamina.

While we don’t know how far and for how long Phelps and the shark will be racing, Lowe is confident that Phelps will never be able to keep up. “On a miles per gallon basis, he would burn out long before the shark would burn out,” he says. “They’re just so efficient, so streamlined, even at a cruising speed.” Great white sharks, he points out, literally never stop swimming, because if they do so, they’ll suffocate and die; they need to maintain a consistent stream of oxygen-rich water flowing over their gills in order to breathe. “Does he think he can swim for 24 hours, 48 hours, a week straight?” Lowe muses.

As for whether racing a shark will put the world’s fastest swimmer in danger? Lowe isn’t too worried: Even if they were in the same tank (highly unlikely), it wouldn’t be too different from the experience many beachgoers unknowingly have. “Chances are you’ve been out there swimming with a white shark, and you didn’t even know it,” he says, noting, with some exasperation, that our cultural fear of sharks neither matches up with the actual threat they pose nor takes into account for the fact that they might be cautious of us, too.

For a guy who spends his days alongside 5-foot-long baby great whites — essentially torpedoes with teeth — it’s not surprising he’s so blasé about Phelps’s abilities. Nature, from his view, has produced much more marvelous creatures.

“Imagine a 4,000-pound shark launching itself 8 feet in the air. Imagine how fast it would have to be swimming in order to do that?” he asks. “When Michael Phelps can swim fast enough that he can launch his entire body out of the water, then he’ll impress me.”

More like this
Science
6.23.2022 11:00 AM
Historic Yellowstone flooding and more: Understand the world through 8 images
By Robin Bea
Science
6.21.2022 10:45 AM
Ancient stalagmites point to a massive drought that upturned 6th century Arabia
By Allison Parshall
Science
6.27.2022 11:00 AM
Letting your cat go outside could spread “life-threatening” parasites — new research
By Amy Wilson, Scott Wilson and The Conversation
Related Tags
Share: