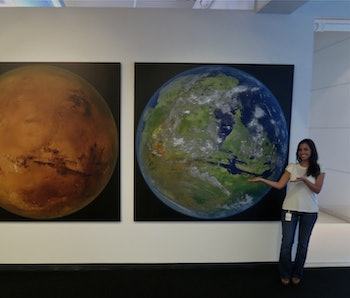 If landing a job at Elon Musk’s aerospace company, founded with the intention of sending humans to Mars, is on your career to-do list, there are a few things you should know. Applying for a job at Space Exploration Technologies Corporation, better known as SpaceX, can be a lot like throwing your hat in the ring for any other job, says those who have gone through the process, but it also has its quirks.

After the slightly terrifying process of clicking the “apply” button, one could wait up to three months before ever getting a response. But respondents on job review site Glassdoor say to not be discouraged. For a company with more than 6,000 employees, the review process can take some time. Luckily, it does seem that once you make it to the interview stage, the rest runs just as quickly and efficiently as a Falcon 9 launch, which is to say, on time, most of the time.

An avionics engineer recently posted on Glassdoor that the waiting and interviewing was “lengthy. Applied online, waited two months, then started reaching out to 2nd-degree LinkedIn connections… My advice: stay patient and be persistent.”

When applying for a job at SpaceX, expect a lot of interviews. Glassdoor users say anywhere from three to ten interviews may be conducted before you ever have an inkling about whether or not you will be offered the job. It usually starts with a phone interview, either with a recruiter or someone in HR. From there, you may interview with your would-be direct supervisor, a future fellow employee, and numerous people who could be on your team.

Many report that the interview process may involve some absolute stumpers, meant to test your knowledge and skill. This may include a myriad of questions about some of the equipment you may be shown in the facility, a test, or even a typical workload that could be given to you to complete over a set course of time.

An anonymous vehicle integration engineer said one of their questions was, “Consider a normal bicycle being pedaled and going forward. Is the chain speed faster, slower, or the same as the ground speed of the bicycle?”

There Is Such a Thing as a Stupid Question

At SpaceX, it might be the case that too many questions, or not the right ones, may throw the interviewer off. This may make it an act of blind faith when accepting the position.

An anonymous IT intern interviewee who was not given an offer said, “It was a fairly easy interview, I aced the technical questions but I didn’t get an offer. Not sure why, I don’t think the person interviewing me liked the questions I had about how often job offers are extended to interns and mobility within the company. They say you can ask questions but just to be on the safe side I’d avoid asking anything substantive.”

A Ticket to SpaceX

Many Glassdoor users said they were flown in for an interview with SpaceX employees, presumably to make sure you are human. (It is highly plausible you could be a robot.) This could be at any of their various facilities, but most likely, if you are working on the Falcon 9 fleet, you’ll be flown to Hawthorne, California. You’ll also be given a tour of the facility. But, watch out, many warn you may be given a pop quiz about some of the truly outstanding things you just witnessed.

An anonymous quality control employee said, “I was granted a phone interview with the quality supervisor and after was invited to SpaceX for an onsite interview with four managers/supervisors as well as a tour of the facility. After that I had a phone screening with a high level executive… Be prepared to answer anything about what you see onsite and know your quality management system and processes well.”

Keep in mind you might not be notified if you were denied for a job, even if you have gone through several rounds of interviews. This is a common problem in many hiring processes. At SpaceX, it appears you might never hear back.

An interviewee for a Falcon Manufacturing Development Engineer position said, “1) Applied online through SpaceX, 2) email from recruiter notifying me of appropriate times to contact, 3) phone interview with recruiter, passed, 4) phone interview with team I applied for, 5) Did not hear back from the company, no email of denial.”

If you are given the opportunity to walk through the pearly white halls of the SpaceX headquarters, you are now a part of some of the most visionary missions on this planet, including the Falcon Heavy, the BFR, and the Interplanetary Transport System, which will fly humans to Mars one day soon. Oh, and you’ll also be working for Elon Musk. NBD.