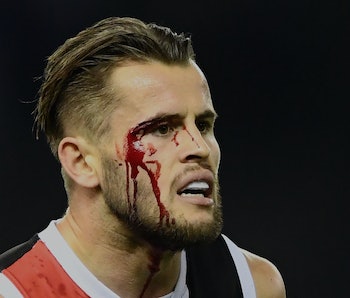 The most important moments in your life probably started with the look on someone else’s face. From the blush of embarrassment to the red-hot flush of lust, humans and many other primates rely on their ability to see color to tell us what the people around them are feeling.

Now, a new study in the Proceedings of the Royal Society Biological Sciences provides some of the first evidence that what our eyesight really evolved to see is the rush of blood to the face. For a long time, scientists thought that our color vision was born of a need to distinguish between ripe and unripe fruit, but the new study suggests that our color vision might actually be the byproduct of our social behavior.

The ability to see red had important implications for our species, suggests James Higham, Ph.D., an assistant professor of anthropology at New York University and one of the co-authors of the study, because doing so might be linked to the ability to detect changes on others’ faces.

Whether we realize it or not, the countless face-dependent interactions we experience each day may shape our social lives. Humans and other primates are unique in this respect: While we’ve all been in situations where the sudden flush of another person’s face makes us recoil in embarrassment or fall in love, most animals haven’t.

That’s in large part because most animals have pretty narrow eyesight, and so they favor smell instead. Cats and dogs go around sniffing everything with wet noses, while the colorblind eyes on the sides of their head get a little less use. But apes, including humans, and monkeys have mediocre, dry noses and two eyes close together for relatively high-quality, 3-D perception that seems well suited for seeing a crimson blush bloom across another person’s face.

To test the theory that the human visual system evolved to see red for social reasons, Higham and his colleagues sat 60 human subjects down in front of photos of female rhesus macaques, which are well known for becoming redder in the face as they become ready to mate. For comparison, participants viewed normal photos together with those manipulated in some way to highlight different types of color vision: Some of the photos were colored to suit our normal human vision spectrum, others mimicked colorblindness, and still others were made to look like they were seen through a DSLR camera. As subjects looked at the photos, they were asked to declare what colors the monkeys faces were.

While the researchers predicted that the photos manipulated to look like they were viewed through a DLSR — which should provide the best and most organized look at an object — would be the most useful in reading the monkeys’ face color, normal human vision succeeded, sussing out the red flush fast.

Higham and his team took this as evidence that the color vision system we share with primates may have developed specifically for the purpose of detecting social signals. While his research doesn’t prove that our eyes developed to see blood, it does provide support for the theory that our eyes are particularly attuned to the color in other people’s faces.

More like this
Science
Feb. 5, 2023
The Plague Is Still Here — And It Could Infect Your Cat
By Tara Yarlagadda
Science
Jan. 29, 2023
Are coyotes dangerous to dogs and cats? Here’s how to keep your pets safe
By Tara Yarlagadda
Mind and Body
Feb. 7, 2023
Scientists mapped the brain circuitry involved in pleasurable touch in mice
By Elana Spivack
LEARN SOMETHING NEW EVERY DAY.
Related Tags
Share: