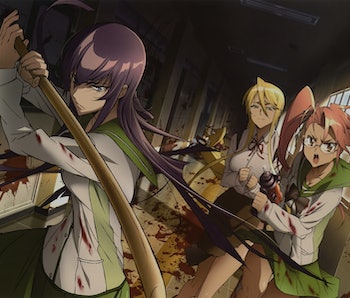 Life sucks when the love of your life is dating your best friend, right? It couldn’t get any worse than that — unless a zombie virus outbreak suddenly tears your world in two. Thus is the life of Takashi Komuro, the protagonist of Highschool of the Dead who’s in love with a girl named Saeko. On the bright side, that best friend — Hisashi Igou — winds up a zombie by the end of the anime’s very first episode.

Adapted from the manga written by Daisuke Satō and illustrated by Shōji Satō, Highschool of the Dead is a wild post-apocalyptic zombie action anime which originally aired in Japan in 2010. It’s an intensely gory, oftentimes horrific portrayal of an undead pandemic entangled with some equally dark and fetishized sexuality.

To call it sporadically perverse would be an understatement, considering the skeevy angle of some shots and the ludicrous anatomy of its female characters. But in spite of its own lecherous lens, Highschool of the Dead delivers a solid zombie apocalypse for fans of the genre.

In addition to being written with solid zombie tropes like societal collapse and the growing threat of other survivors, Highschool of the Dead also dabbles in video game-like archetypes for its characters that amp up the entertainment value: Takashi uses a baseball bat, Rei Miyamoto fights with spear-like weapons, and Saeko Busujima fights with a bokken (wooden sword) and later acquires a legit katana. As the story progresses, they get upgrades to weaponry and gear as if they’re “leveling up” in a gamified world.

Other characters include Saya Takagi, the self-proclaimed genius and long-time friend of Takashi’s; Kohta Hirano, the dorky and overweight gun enthusiast (and only other dude); and Shizuka Marikawa, the school nurse. Along the way, they also pick up a young girl, Alice Maresato, and her dog. The way the core cast responds to the presence of Alice and her dog is essential in the way it adds a sense of humanity to the adventure. Without their compassion for these two more vulnerable figures, each character would become just as cynical and disturbing as the cruel survivors they come across.

The opening few episodes depict the disparate students slaughtering zombified versions of their former classmates, eventually banding together to escape the school grounds. The entirety of the 12-episode anime run only takes up a matter of a few days with the crew carefully moving between different safe spots while scrounging up resources.

One of Highschool of the Dead’s major defining characteristics is its firm place in the subgenre of “harem” anime, which tends to emphasize love triangles or even polyamory. In this case, a prominent sub-plot is the love triangle between Takashi, Rei, and Saeko. Rei is the girl Takashi has long pined for, who demands both attention and emotional space after the death of her zombified boyfriend. Meanwhile, Saeko enters Takashi’s orbit as the uber-capable, ultra-cool female warrior reminiscent of badass anime women like Attack on Titan’s Mikasa. She admires, respects, and attracts him.

As is the case with many harem anime, Takashi as a protagonist comes across as generically “cool” and brooding while the many beautiful females surround him; he’s intended to be a stand-in for viewers seeking wish fulfillment and overwhelmingly positive amounts of female attention.

For those very niche viewers out there dreaming of dominating a zombie apocalypse while also being surrounded by beautiful women, there’s no better anime than Highschool of the Dead.

Highschool of the Dead is currently streaming on Hulu.

More like this
Culture
5.12.2022 11:30 AM
You need to watch this genre-warping time-loop anime on HBO Max
By Mónica Marie Zorrilla
Entertainment
5.18.2022 3:49 PM
Rick and Morty: The Anime could fix the show’s biggest problem
By Corey Plante
Entertainment
5.25.2022 11:31 AM
You need to watch Sam Raimi's most underrated movie before it leaves HBO Max next week
By Dais Johnston
Share: