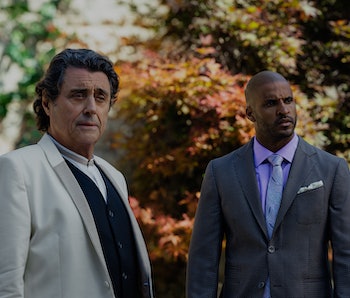 The season finale of American Gods Season 1 has arrived, bringing a storm, a gathering of Jesus, and an ending that’s a bit of a head-scratcher to viewers who haven’t read Neil Gaiman’s novel. After Shadow and Wednesday head to Kentucky, every plot line converges in an explosive finale at Easter’s house.

“Once upon a time there was a queen.”

The cold open begins in the present day, where Wednesday and Shadow are apparently getting new clothes from the perpetually scene-stealing Mr. Nancy. Nancy and Wednesday have a rare ease to their relationship, compared with Wednesday’s often tense meetings with other gods like Czernobog and Vulcan. They don’t necessarily get along swimmingly, but they’re onto each other’s bullshit and clearly share a mutual respect.

It’s Mr. Nancy who provides the narration for the bulk of the episode, as he begins telling them Bilquis’s story — a show-only invention. It’s an intriguing choice for Nancy to spin the tale instead of Mr. Ibis, but Nancy gives it power and energy, like a good disco song.

With his tale, Nancy reveals Bilquis’s origins as the Queen of Sheba. At the height of her power, she’s shown draped in gold as her followers worship her with sex. The ensuing orgy sequence is perhaps the most Bryan Fuller-esque segment to air on American Gods thus far. As the years pass and she’s forgotten, she loses her home and sense of self. Heartbreakingly, she sees a news report of ISIS destroying her former temple. That’s where Technical Boy swoops in to recruit her to the New Gods team, luring her with the ease of dating apps. Her meeting with Technical Boy is in the book, but the element of recruitment is new for the show.

The question of why Bilquis uses dating apps was a minor plot hole in the first episode, but it’s nevertheless satisfying that the show is circling back to fill it in.

“Get yourself a queen”

After Mr. Nancy’s tale about Bilquis, Wednesday and Shadow go find their own queen, Easter (Kristin Chenoweth). She’s the ancient Germanic goddess Eostre, and she’s still flourishing thanks to modern Christianity drawing from much of her mythology. As Wednesday points out, she’s hiding behind a smokescreen — just like Vulcan and his bullets, she’s able to retain relevance. But the modern worship of Jesus is hardly a direct line to the real Easter.

Easter’s mannerisms and the interest she takes in Shadow are true to Gaiman’s novel, but the rest of her story — her house in Kentucky, the Jesus convention — is show-only. It’s an odd choice for Shadow to finally become a believer thanks to a conversation with Jesus. The scene feels like the show is taking a stance on a modern religion in a way that it’s avoided so far, preferring to view belief and worship with a more anthropological eye. But then again, Shadow is a modern American dude, and he also acknowledges that he believes in “everything.”

“I was killed by a god? Which fucking god?

It’s not a real party until Mad Sweeney and Laura roll up in their ice cream truck. Intriguingly, when Sweeney asks Easter to restore Laura’s life, she reveals that Laura was killed by a god.

When Mad Sweeney killed Essie McGowan last episode, it was an act of mercy and grace. She was at the end of her long life, and she had spent it worshipping him. But as this episode reveals, he also killed Laura, engineering her fatal car crash on Wednesday’s orders. Whether or not Laura is Essie reincarnated or simply her descendent, this was an act of nonconsensual sacrifice and collateral damage. Sweeney and Laura share a spiritual connection, but it’s been spun in different ways over the years.

Crucially, when Laura guesses that “divine intervention” was also what screwed up her casino-robbing plan, resulting in Shadow’s incarceration, Sweeney talks about gods as if he’s not one. “What do you think gods do? They fuck with us. Don’t take it personally. I don’t,” he says. Going into Season 2, this cements Sweeney as the one character who exists in the liminal space between those who pull the strings and those yanked around by them.

“You only matter in times of war.”

“Come to Jesus” confirms that Wednesday is Odin. As the very first episode showed, he gets his power from war. He therefore has stakes riding on this brewing war between the Old Gods and New Gods. He reveals his true identity to Shadow in a psychedelic storm. This is the same way it happens in the novel, with one key difference: In the novel, it happens at The House on the Rock. Here, it happens before it.

As “Come to Jesus,” reveals, Wednesday needs Shadow — needs him so badly he orchestrated his stint in prison and his wife’s death — just to put him in a position where he has nothing left to lose. This is a fascinating and disconcerting affirmation of Shadow’s importance to the big picture. Season 1 has yet to reveals exactly what Shadow’s significance is, but going into Season 2 there’s no question that he’s not just an ordinary guy.

With that, the scene cuts to Bilquis arriving at the House on the Rock. To non book readers, this ending was a big “and…..so?”

In the novel, the House on the Rock is the holiest place, the spot where the Old Gods convene. It’s important to their war, to Wednesday’s grand plan, and the plot. If Bilquis is secretly aligned with the New Gods, however, and she’s beating the Old Gods there, that’s going off-book. There’s no telling what will happen next.

As Season 1 closes on that note, “Come to Jesus” is emblematic of the season as a whole: Bold, beautiful, messy, not always coherent, but vibrant and fun as hell.

American Gods has been renewed for a Season 2 at Starz, but there is no word yet on a premiere date yet.