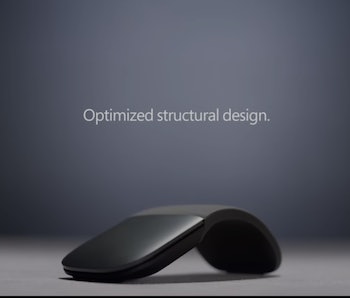 Computer mice aren’t known for being a hotbed of technological innovation. The ball mouse came around in the 1960s, and it took decades to develop fairly minor improvements like more accurate laser mice and more annoying wireless mice. There were also trackballs, but only weirdos like trackballs. Apple injected some creativity into the market with the release of its touch-tracking Magic Mouse, but even that is basically just a mouse crossed with a trackpad.

On Thursday, Microsoft quietly released a promotional video for the new version of its Surface-oriented Arc Mouse line, which brings its unique take on both the control and ergonomics of mice to a whole new audience.

The Arc Mouse is defined by two things. The first is the ability to bend upward into a curved shape that can fit any user’s hand and particular mousing conditions perfectly. This has been improved over past iterations with better snapping into place, so it feels sturdy and usable in any position. When the time comes to pick up and move, the mouse easily lays flat so it can slip into bags and tablet sleeves.

The portability that can come from the curvature idea has until now meant that the Arc Mouse was a de-facto Surface peripheral. Now, Microsoft seems to be casting a wider net, as the Surface branding has fallen away.

The other big feature of the Arc Mouse has been significantly expanded this time around: touch controls. Like Apple’s Magic Mouse, the Arc Mouse features a “full scroll plane,” meaning that users can scroll in any direction. Though the internet is basically oriented straight up-and-down at this point, spreadsheets and design programs often require scrolling both vertically and horizontally, and the ability to move diagonally across a document can be an incredible time-saver.

And, while it’s obviously too early to say how well the mouse will be built, Microsoft did choose to include a mention of “optimized structural design” in the above announcement video, which seems to be a direct reference to prior Arc Mouse’s reputation for feeling light and insubstantial.

With the unified clicking space, lacking any physical distinction between right- and left-click, the unit is also clearly aimed at looking sexier than anything Microsoft has released in the past.

The new Arc Mouse will reportedly be available for $80 at launch, but as of right now that launch date is simply “Coming Soon.”