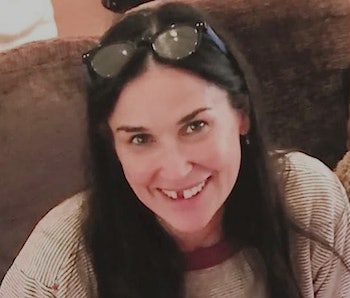 When Demi Moore went on the Tonight Show on Monday to promote her new movie Rough Night, Jimmy Fallon showed the audience a photograph of the actress flashing a toothless grin. In the interview, Moore praised modern dentistry for fixing her pearly whites, explaining that the underlining cause of her tooth loss was stress.

“I’d love to say it was like skateboarding or something, really, kind of cool,” she explained. But the real culprit, she said, was stress, which she also called “one of the biggest killers in America.” But can stress really kill the symmetry of a perfect smile?

It’s not a direct cause, but the reasons why people normally lose their teeth can certainly be exacerbated by stress. The major cause of tooth loss in the United States is gum disease, which usually results when people don’t brush or floss regularly, and can also stem from tobacco use and other health issues, including diabetes.

Ultimately, when people have gum disease, their gums become inflamed by bacteria and, if the infection gets bad enough, break down, losing their ability to keep teeth in place. People also lose teeth that are decaying from cavities or those that have become weak from osteoporosis or tooth grinding. Those teeth will either fall out naturally or will need to be removed by a professional.

Preventing gum disease comes down to maintaining proper dental hygiene and general health. But regular flossing, brushing, and dentist visits aren’t easy to do when you’re stressed, and neither is taking adequate care of your body.

When people are stressed, they are more likely to get sick. In an article published in 1996 in the European Journal of Oral Sciences, researchers speculated that stress weakens the immune system, making people more prone to infections like gingivitis and gum disease.

Stressed people are also more likely to pick up unhealthy habits, like smoking or eating junk food, as well as the habit of grinding their teeth. All of these things, naturally, aren’t great for promoting dental health.

It also doesn’t help if your socioeconomic situation isn’t great: In a 2007 study published in the Journal of Dental Research, dentists from the Queen Mary University of London and the Australian Research Centre for Population Oral Health studied tooth loss in 2,915 adults, analyzing the link between psychological stress, socioeconomic deprivation, and tooth loss. They concluded that people who were socioeconomically deprived had “higher levels of psychological stress, risk behavior, and retention of <20 teeth” — in other words, poor socioeconomic circumstances could lead to poor health habits, which could also lead to lost teeth.

While her high socioeconomic status is secure, Moore joined a club that comprises more than half of the country when she became toothless. According to the American College of Prosthodontists, 178 million people in the United States are missing at least one tooth. Teeth fall out either because gums around the teeth or the tooth itself is loose or unhealthy.

Moore may no longer have her original two front teeth, but she hasn’t lost her sense of humor about it. She showed a video of herself sans tooth, joking about how she looked while waiting at the dentist’s office. “My children love seeing me without my teeth,” she explained, “because they think it makes me look more vulnerable and more human.”