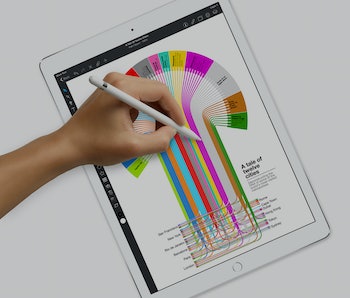 Apple’s new iPad could offer a glimpse at the future of device displays. The 10.5-inch iPad Pro, which started reaching consumers’ hands on Tuesday, comes with a new 120Hz screen dubbed “ProMotion,” and first impressions are glowing. The new display, which updates the image at double the rate of a standard computer screen, means users can read text as they’re scrolling and write with the stylus like a traditional pencil.

“This iPad has ruined me,” Reddit user Volerikan said on the Apple subreddit. “I hope the next iPhone has ProMotion. It’s so weird being able to read something while scrolling.”

ProMotion isn’t just about screen refresh rate. It’s a marketing term that also encompasses software built into the iPad to vary the refresh rate. When watching a movie filmed at 30 frames per second, for example, the iPad will refresh the screen at a quarter of the standard operating rate. When looking at a static photo, ProMotion can turn the rate down further. This saves on battery life.

One YouTube user NyanBlade showed the difference in a video, captured at 240 frames per second and slowed down. On the left is a new 120Hz iPad and on the right is a standard 60Hz iPad.

The new screen is shaping up to be one of the most dramatic changes to Apple’s mobile devices since the Retina display. Introduced in 2010 with the iPhone 4, the screen doubled the number of pixels, both vertically and horizontally, while maintaining the same 3.5-inch size screen. The resultant screen had 326 pixels per inch, which the company claimed was smaller than the human eye could distinguish at normal viewing distance. Photos, videos, and user interfaces all looked far sharper.

“I’ve been using the new 10.5-inch iPad for barely 30 minutes. Now I’m typing this on my iPhone 7 and it already feels jittery. Not on every animation, but most of them feel… off, like it’s skipping frames,” said Reddit user Paige4o4. “It’s just like when Retina first came out. Once you try it, you can’t go back without noticing the flaws in your other devices.”

The screen has impressed users so much that there are now calls for Apple to bring the technology to the next iPhone. The iPhone 8, expected to launch later this year, is rumored to be a major redesign of Apple’s flagship smartphone.

“Once you see/feel the difference it’s hard to unsee it anymore, scrolling on my 6s Plus feels so much worse than on that iPad 10.5… The jitter… my eyes,” said Reddit user itzmekhaled. “I hope Apple standardizes this on their new products.”

More like this
Gear
November 29, 2022
Everything you need to know about Apple’s iPhone 15
By Jackson Chen and Raymond Wong
Innovation
22 hours ago
A sports physicist reveals the hidden science behind this year’s World Cup soccer ball
By The Conversation and John Eric Goff
Innovation
15 hours ago
USDA approves GMO purple tomato with brain-boosting and cancer-fighting properties
By The Conversation and Yang Yue
Related Tags
Share: