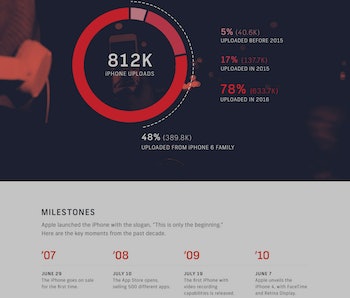 In the 10 years since it first launched, the iPhone has revolutionized photography. Millions of people now have a high-quality camera in their pocket almost all the time, leading to a vast increase in the number of smartphone pictures uploaded to photo sharing sites. The iPhone 8, expected to launch this fall, is rumored to take this to a new level with a new screen and enhanced low-light capabilities.

A new infographic from Shutterstock details how the iPhone has changed the way people think about and take photos. The company expects that the number of iPhone photos uploaded to its royalty-free image site will rise to 1.5 million over the course of this year, up from the current figure of 812,000. This is thanks to the combination of hardware and software aimed at improving the phone’s picture-taking capabilities.

The iPhone 8 is set to expand on this further. The dual lens system, introduced with last year’s iPhone 7 Plus, is expected to make another appearance, which leaks show will appear in a vertical rather than horizontal arrangement. The two lenses work together to create a “portrait mode” that recreates the shallow depth of field found on high-end professional cameras.

“This isn’t the first time a camera manufacturer has put a dual camera system into a camera phone — but with Apple’s software app ecosystem behind it, I believe we will change photography forever,” Shutterstock CEO Jon Oringer said in a Medium post.

View the infographic below to see how iPhones have changed photography, and what comes next:

More like this
Innovation
7 hours ago
9 veggies that are healthier cooked than raw
By Laura Brown and The Conversation
Innovation
6.24.2022 5:00 AM
Beam-steering radio technology could help autonomous cars finally hit the road
By Sascha Brodsky
Innovation
6.21.2022 11:00 AM
No, Google’s Deepmind isn’t on the verge of human-like reasoning
By Tristan Greene and Undark
Share: