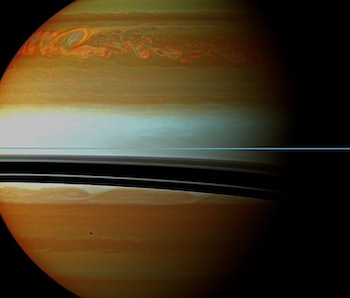 You’d like to get a good look at Saturn, right? Sure you would. Why should Cassini have all the fun? Luckily for you, tonight — Thursday, June 15 — is the best evening to do it, because the planet will be at its brightest and closest point to Earth all year.

That’s because it’s Saturn’s annual “opposition”: the day when the Earth passes between the sun and the ringed planet, making the latter exactly opposite the sun in the sky. Saturn will rise in the east and set in the west, like the sun, though it will do so by night; its descent will correlate with the sunrise.

Since it’ll be directly across from the sun, Saturn’s face will be totally illuminated. You’ll be able to observe the gas giant with just your eyes, but if you want to see details, like its rings and some of its moons, a medium-sized telescope should do the trick.

Don’t know how to find Saturn in the sky? Look for the Scorpius constellation (the one that resembles a fishhook tail), and then find the brightest star within it, Antares. Saturn is near that star, and you’ll be able to tell them apart because the star is reddish and the planet is golden.

If you happen to miss the view on Thursday night, you’ll still be able to get a good look at the planet all throughout June, and even the rest of the summer. Plus, there’s always next year’s opposition, which will occur on June 27, 2018.

If these glimpses aren’t close enough for your satisfaction, stay tuned for something even better: On September 15, Cassini will take its “grand finale” plunge into Saturn’s atmosphere, and even though it will have to stop sending back images several hours before it burns up, it will still be able to take some ultra-close photos first.