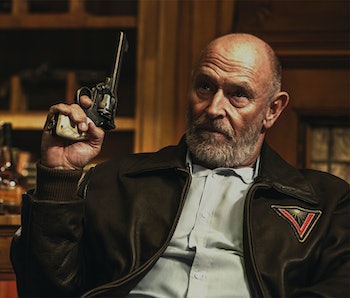 Vulcan is an uneasy and dangerous character on American Gods, a god who inspires his followers to worship guns and fall into boiling industrial vats with smiles — and if you want, you can visit the real-life statue that inspired him.

As played by Corbin Bernsen, Vulcan is a show-only character who appears in the sixth episode of the Starz television adaptation of Neil Gaiman’s American Gods, which imagines a war brewing between old gods of myth and new American preoccupations like media.

Vulcan is the ancient god of volcanoes who has figured out how to “franchise” his faith into modern industrialization. By inscribing his name on bullets — or hand-held volcanoes — he’s able to get power through humans “worshiping” him.

The show portrays Vulcan and the town of Vulcan, Virginia, as an insular small town where citizens gather to worships guns. In his introduction to Vulcan, Ian McShane’s Wednesday says that they’re dedicated to preserving “their” America. “There aren’t just two Americas. Everyone looks at Lady Liberty and sees a different face,” he explains to Shadow.

He came about because I went to Birmingham, Alabama where they have an enormous Vulcan statue. I heard stories about how people used to fall into the steel works, but they wouldn’t close down the steelworks to put in the safety railings because it was actually cheaper for them to send the obligatory $50,000 for each death to people’s families than it was for them to close down the steel works for three days, have everything cool off enough, and then install the safety railings. That would have been millions. People just carried on dying, and I thought, That’s a sacrifice.

The high death toll isn’t the only place where American Gods has real-world parallels. Birmingham actually has an entire park and museum dedicated to Vulcan.

The Vulcan is the world’s largest cast iron statue and is considered an important symbol of the American iron and steel industries. The statue was designed Giuseppe Moretti and cast from Alabama iron in 1904. In 1999, however — coincidentally around the time Neil Gaiman was writing American Gods — the statue almost saw its end. Fallen into disrepair, the statue was removed from its perch and the park was closed. The nonprofit Vulcan Park Foundation was formed to restore the statue and Vulcan park as a tribute to Alabama’s history.

Vulcan captures the spirit of American Gods — based on a Roman myth, designed by an Italian, and symbolizing an industry and region that different Americans view in different lights.

More like this
Culture
November 26, 2022
How Darren Aronofsky's oddest sci-fi movie inspired a real quest for longevity
By Peter Ward
Entertainment
15 hours ago
The Guardians Holiday Special has a secret Star Wars reference
By Eric Francisco
Entertainment
14 hours ago
Andor Season 2: Tony Gilroy reveals a huge time jump — and who survives it
By Dais Johnston
Share: