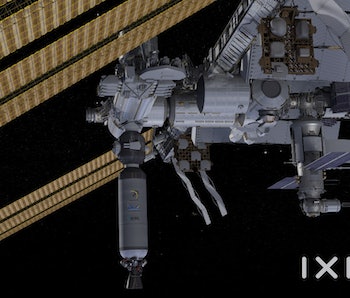 The heralded era of the International Space Station is ending soon, and the question for what will replace it is still up in the air. One solution — turn old rocket boosters (you know, the kind that don’t come back down to Earth in a spectacular vertical landing) into interchangeable parts for a “plug-and-play” type of space station. It’s a weird idea, but NASA seems to be in favor of it — they just gave a contract to a private company to do a concept study to figure out just how realistic this might be.

Last August, NASA selected six companies to build prototypes of deep space habitats that could undergo ground testing, as part of its NextSTEP-2 program. The goal, obviously, is to fine-tune a potential design for a contraption that could house astronauts in the region of space that exists between Earth and the moon in order to make it easier for future explorers to get to Mars, and worlds beyond.

Those technologies, of course, will also be critical in developing a successor — or multiple successors — to the International Space Station, whose aged structure and components have housed humans in orbit for 16 years straight.

One of those companies taking part in NextSTEP-2, NanoRacks just inked a new contract with NASA that could very well create a new type of space station that they might never have to worry about becoming too old and needing to be cared for — because it revolves around repurposing of space junk.

Meet Ixion: a “commercial habitat concept study” that calls for using the upper stage of used launch vehicles and converting them into structures for space stations. The new contract for Ixion’s study, funded by the NextSTEP-2 award, is part of NanoRacks’s overall goal to make space travel and space station contraction and habitability much more affordable.

Ixion basically works as an extension of “plug-and-play” infrastructure. Think of it like LEGOs — you can use different blocks to create an incredible variety of different structures, each with their advantages and disadvantages that better fit the purpose of the structure.

The new contract is basically a feasibility study to see how realistic it might be to convert upper stage rocket boosters into habitat parts in space. Although this means future space stations could essentially be built out of free junk floating around in orbit, it requires more work in the way of enabling robotics to corral those pieces up and put them together, along with installing essential life-support systems that can turn these old pieces of metal and burned off fuel into livable spaces.

Still, that certainly beats the heavy costs of launching those parts into space, one by one.

Could an Ixion space station replace the ISS? That’s probably unlikely, but a series of Ixion stations could be the real successor. Each one could be specially designed for a specific purpose that better fulfills the kind of science, technology, or defense goals for NASA and other private companies.