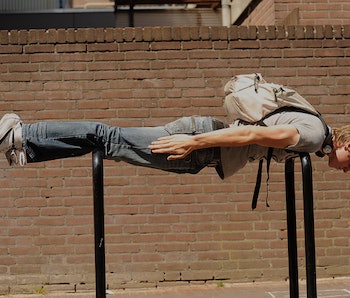 We lived in a simpler world back around, oh, 2010. It was a time when all you needed to do was lie face-down on a flat surface with your arms by your side and have someone take your photo to get your 15 minutes (or less) of Internet fame. Planking took Facebook by storm, burning bright and then flickering out so quickly that, lo, we scarcely had time to contemplate what, if anything, it was all about.

The origins of the craze remain contentious. Planking reached critical mass at the turn of the decade, but it was revving up as early as 2008, when an Australian named Sam Weckert created a Facebook page called “Official Planking” to catalogue photos of him and his friends in the now-familiar ab-clenching pose.

What started as a prank to perform on dance floors in clubs progressed to balancing flat on other sturdy objects: mail boxes, trash cans. “It didn't really blow up until a few local radio stations got hold of it, ran competitions, and it grew very quickly,” Weckert told the BBC in 2011. But, like Newton and Leibniz simultaneously discovering calculus, Weckert's crew was overlapped by at least two other planking efforts who might rightly claim its invention.

Two friends named Gary Clarkson and Christian Langdon from Somerset, England, claim they started lying face-down in public spaces in the late '90s, just bored teens being board teens. Clarkson described it to The Guardian as “Just a really stupid, random thing to do.” They called this masterstroke the “Lying Down Game" and created a Facebook page in 2007 — still functioning! — after years of passing the idea along to school friends, who then passed it along to their friends who also wanted to be in on the joke. The joke of lying down.

Planking hit a new plateau when Australian rugby player David “Wolfman” Williams adopted it as his go-to scoring celebration. It picked up extra street cred when the country notched its first planking arrest and slowly telephoned its way through England. The fad broke out of its island homes via social media and seemed to be progressing nicely, until it reached comedian Tom Green, who staked a claim of his own.

It seems the creator of "The Bum Bum Song" may also have created planking in 1994 in an unaired segment titled “Dead Guy” for his pre-MTV cable access show in Ottawa. It involved the comedian lying face down on crowded streets of the Canadian capital to see if anyone would stop and see if anything was wrong.

Green deadpanned to CNN in 2011, “I don't want to take anything away from anybody, but I do have video evidence." The video in question, which Green eventually posted to Twitter, was so obscure that the comedian had to contact Rogers Cable, the company in Canada that ran his cable access show, to help unearth on-camera evidence of the original prank.

In need of a proper war or kidnapping or plague or election or something, major media covered planking as if it would cure cancer. In a similar, desperate play for attention, celebrities also went horizontal: Ellen Page, Kristen Bell, Dwight Howard, Diplo, basically the entire cast of The Office and even Flavor Flav joined in the alleged fun. What once was quirky hit the mainstream and instantly became annoying. The backlash began.

Things took a morbid turn in 2011 when a 20-year-old Australian man named Acton Beale fell to his death after attempting to plank from the balcony of a seven-story building. Planking had become menace. "Perhaps the magic has gone now. I probably won't do it again," Daniel Hoppin, one of the friends of the British pair who started the Lying Down Game, said afterwards. "People need to concentrate on the humorous ones rather than the extreme, dangerous ones."

Google searches for the term tanked, bottoming out in 2013. Planking was allowed to drift into obscurity, remembered only by Internet writers in search of absurd trends to explore. What, then, did planking mean, in the big scheme of memes?

Well, if nothing else, planking was a rapid-fire collective exhibitionism fueled by the Internet’s ability to gather like-minded people to be furiously (if even spuriously) excited about something. Then it displayed the Internet’s ADD-tinged tendency to race to the next shiny thing, and the thing after that without sentimentality, and without even realizing it has forgotten what it once loved.

Perhaps because it rose to such heights, planking also died a total and irreversible death. It is gone. An attempt to plank now would be met with ridicule or distant curiosity — was that a thing, really, and what was its name again? While it had its variations — Tebowing and owling come to mind — they never captured the absurdist and collective magic of the original. If anyone sees planking face-down in the street somewhere, do not call an ambulance. Call a hearse.