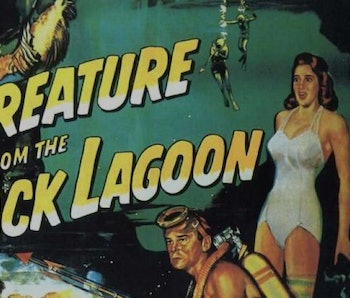 The Mummy marks the official launch of Universal’s planned Dark Universe, which should unite many of the studio’s beloved Classic Monsters. The characters are largely beloved, and multiverses are all the rage these days, but writer/director Alex Kurtzman did his best to avoid teaser temptation and keep the focus on the first installment.

“Everyone’s asking is there going to be a Monsters Avengers?” writer/director Alex Kurtzman told Inverse as part of a longer story on constructing the multiverse. “And there could be, certainly that’s what happened with the classic Monster films, but I think the key for us is that each monster film must be satisfying on its own terms.”

It was impossible, though, to keep other monsters out of the Tom Cruise-starring film entirely devoid of easter eggs. The most prominent come midway through the film, when Cruise’s character, Nick Morton, first enters the Prodigium headquarters in London. This is where Dr. Jekyll (Russell Crowe) catalogs and keeps the monsters that his organization tracks and neutralizes, which serves the logic of the story: Prodigium will serve as the connecting link between future installments of the Dark Universe series.

On display in Dr. Jekyll’s lab are two items of particular interest. One is a human skull with vampire fangs, a clear teaser for Dracula. The other is large glass case with a fin that looks like it was removed from a certain creature that dwells in a black lagoon. Kurtzman was OK with inserting these nods to fans because of their utility in the story.

“One of the most important things is to tie them to character subjectivity. We don’t start any of those easter eggs until Nick enters into Prodigium and begins to see them for himself,” he told Inverse. “And so by that point in the film, you’ve been so tied to his experience emotionally, that when you get there, you’re experiencing it through his eyes, which makes it a more satisfying reveal.”

For those more interested in shout-outs to the last version of The Mummy, Kurtzman included a very quick reference to the Brendan Fraser-led movie, too.