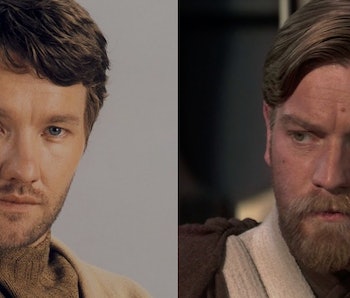 Overeager fans of Ewan McGregor’s Yung Obi-Wan Kenobi aren’t the only ones who want the actor back in action as a Jedi; Joel Edgerton has publicly stated that he’s interested in reprising his role as a younger Uncle Owen, perhaps to team up with Obi-Wan for some adventures on Tatooine.

In an interview with Business Insider, Edgerton spoke about his ideas for shoehorning himself back into the Star Wars universe. His first, and probably best, is to have Uncle Owen do “cool shit,” and then “he comes back and slips back into that unassuming moisture farmer role.”

Though the actor doesn’t explicitly suggest that Obi-Wan and Owen work together on some task on Tatooine, the implication is very much there.

“My pitch to all of them,” Edgerton said, “is there’s definitely some Owen possibilities, but also, I was only in the movie for a pinch of time. How about I play someone else?” Boba Fett is another suggestion he has.

The character of Owen Lars first appeared in the very beginning of A New Hope as a stern parent figure to a young Luke Skywalker on a Tatooine moisture farm. The Empire torches their house — Owen included — looking for R2-D2 and C-3PO.

Joel Edgerton then played a younger version of the character briefly in Attack of the Clones, and again at the very end of Revenge of the Sith to depict how Luke wound up with Uncle Owen when he was still just a baby.

In addition to the latest trilogy that was kicked off with The Force Awakens, anthology films like the Han Solo-focused spin-off have left fans clamoring for a standalone Obi-Wan Kenobi film. If an Obi-Wan anthology ever comes to be, and if it takes place on Tatooine, including Owen might just make Joel Edgerton’s dreams come true.