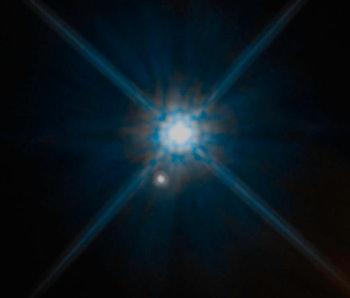 If someone built a sleek spaceship that could jet through the universe at 186,000 miles per second (the speed of light), it would still take 18 years to reach a star named Stein 2051 B. Undaunted by the vastness of space, scientists used a technique proposed by Albert Einstein to figure out the mass of this distant ball of gas.

Researchers used Einstein’s prediction that a star’s mass could be measured by observing how much that star deflected the light from a more distant background star. Publishing their results this week in the journal Science, they showed that the white dwarf star Stein 2051 B has the mass of about two-thirds of the sun.

“It’s like placing the star on a scale: the deflection is analogous to the movement of the needle on the scale,” lead researcher Kailash Sahu of the Space Telescope Science Institute told NASA.

Most every star (about 97 percent), including our own sun, will eventually become a white dwarf, which are stars that are sort of dead. They’ve spent all their nuclear fuel (hydrogen), and in a rather dramatic display, shed their outer layers into an extravagant, psychedelic cloud, leaving just a tiny but profoundly dense ball of their former selves. This new star-measuring tool will allow researchers to observe how stars like ours transition into white dwarfs.

The technique is grounded in gravity, that omnipresent, invisible force that makes carrying groceries such a drag. Einstein proposed that objects like stars were so massive and heavy that they actually changed the shape of space — like setting a bowling ball down on your mattress. The contour of the mattress depresses, and the same thing happens in space. So as light rays from another star pass through this distorted area, it will deflect the light rays, and they’ll leave this patch of space traveling in an altered trajectory.

Considering this, Einstein predicted that if we viewed a far-off star in space (let’s name this star Bob), Bob’s light would be bent if there was another star like Stein 2051 B between us and Bob. So as the light from Bob entered the distorted space created by Stein, it would bend the light and create some visual trickery; to us Earthlings, it would look as if Bob ever so slightly moved, but in reality Bob’s starlight got deflected en route to our eyes.

In March 2014, scientists finally got their chance to test out Einstein’s experiment. Stein 2051 B was going be moving almost in the direct path between Earth and a distant background star, like Bob. Almost is the essential ingredient here. If both stars were perfectly aligned, Stein 2051 B would block much of the light, as opposed to deflecting most of it, which would ruin the experiment.

The conditions for weighing another star are certainly rare — but next year the European Space Agency will release a vast catalog of star information from its star-seeking Gaia satellite, allowing researchers to better forecast when they can weigh other stars.

Abstract: Gravitational deflection of starlight around the Sun during the 1919 total solar eclipse provided measurements that confirmed Einstein’s general theory of relativity. We have used the Hubble Space Telescope to measure the analogous process of astrometric microlensing caused by a nearby star, the white dwarf Stein 2051 B. As Stein 2051 B passed closely in front of a background star, the background star’s position was deflected. Measurement of this deflection at multiple epochs allowed us to determine the mass of Stein 2051 B—the sixth-nearest white dwarf to the Sun—as 0.675 ± 0.051 solar masses. This mass determination provides confirmation of the physics of degenerate matter and lends support to white dwarf evolutionary theory.

More like this
Science
7.2.2022 10:00 AM
Astronomers discover a quirky star with a surprisingly galactic feature
By Nancy Atkinson and Universe Today
Science
6.26.2022 10:00 AM
In the search for dark matter, an unexpected tool may give scientists hope
By Antonis Antoniou and The Conversation
Science
6.30.2022 10:45 AM
These 5 objects could be Webb's full-color first images
By Kiona Smith
Related Tags
Share: