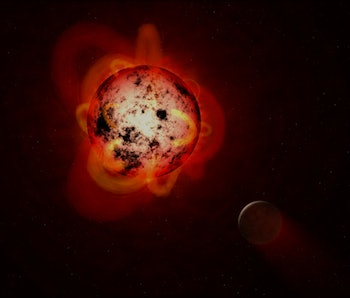 Here’s some slightly bad news for anybody who dreams that their descendants will one day live on a planet orbiting the nearby star Proxima Centauri: The star could frequently flare up and kill you (and possibly any aliens).

So even though red dwarf stars like Proxima Centauri are cool enough, small enough, and contained enough that they are often thought of as the perfect stars for habitable planets, they might not be so perfect after all.

“Are red dwarfs really as friendly to life as they appear, or do these flares make the surfaces of any orbiting planets inhospitable?,” researchers at the Space Telescope Science Institute in Baltimore wondered when announcing the news this week.

A team of scientists has reviewed a decade of ultraviolet observations by NASA’s Galaxy Evolution Explorer spacecraft, sifting through to find rapid increases in the brightnesses of stars, which is an indication of a flare.

What they found was the red dwarfs generally produce small flares, which means habitable planets may be able to survive with a thick enough atmosphere. However, the smaller flares could be more frequent, which may threaten life.

“What if planets are constantly bathed by these smaller, but still significant, flares?” Scott Fleming of the Space Telescope Science Institute, said. “There could be a cumulative effect.”

GALEX found that the flares are about the same strength as our sun’s. But, because red dwarf stars are cooler than white dwarfs like the Sun, planets would have to be much closer, meaning these flares could be catastrophic no matter how small or frequent. This would be bad news for the recently discovered TRAPPIST-1 solar system, which has a red dwarf and at least three orbiting planets in the habitable zone.

When a large flare hits a habitable planet, it can entirely strip it of its atmosphere, sending harmful radiation and UV light directly to the core, destroying whatever life could have been surviving.

The news was shared this week at a meeting of the American Astronomical Society in Austin, Texas.

The research will continue when the James Webb Space Telescope begins operation in late 2018 as the team hopes to see the atmospheres of exoplanets and determine how a red dwarf star might shape life on them.