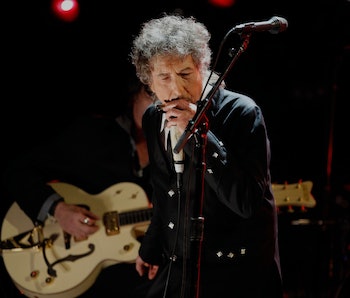 Bob Dylan has finally delivered his Nobel Prize acceptance speech — just in time to claim the reward. On October 13, 2016, it was officially announced that the music legend won the Nobel in Literature. Nobel winners, however, are required to deliver a lecture in order to receive both the award and the prize money, which is about $900,000. How many months does a winner have before that money is lost? The answer, my friend, is six months. Meaning, Dylan had a few days to spare before the six-month mark with his speech on June 4.

While Dylan is the first musician to win the Nobel Prize in literature, his lecture leaned heavily to books rather than music. Sure, this was a controversial choice. Some applauded the Swedish Academy for going outside the box and selecting a musician. Others maintained that Dylan’s songwriting skills do not fit the criteria and a novelist or poet deserves the prize. Nonetheless, Dylan gave his lecture, locking down the award and sharing three books that changed his life and influenced his work.

High school English teachers across the country, rejoice. These three recommendations are most likely already on your syllabus.

About Moby Dick, which was published in 1851 and considered a failure at the time of its release, Dylan summarized the plot about Captain Ahab’s obsessive lust for vengeance for the white whale that bit off part of his leg. He explained how the book is simultaneously demanding and straightforward. “Ishmael survives,” Dylan said about the narrator’s fate. “…That’s the whole story. That theme and all that it implies would work its way into more than a few of my songs.”

Dylan highlighted the novel’s multicultural nature and the way it layers disparate crumbs of knowledge from different fields:

The ship’s crew is made up of men of different races, and any one of them who sights the whale will be given the reward of a gold coin. A lot of Zodiac symbols, religious allegory, stereotypes … This book tells how different men react in different ways to the same experience … Everything is mixed in. All the myths: the Judeo Christian bible, Hindu myths, British legends, Saint George, Perseus, Hercules – they’re all whalers. Greek mythology, the gory business of cutting up a whale. Lots of facts in this book, geographical knowledge, whale oil – good for coronation of royalty – noble families in the whaling industry. Whale oil is used to anoint the kings. History of the whale, phrenology, classical philosophy, pseudo-scientific theories, justification for discrimination – everything thrown in and none of it hardly rational. Highbrow, lowbrow, chasing illusion, chasing death, the great white whale, white as polar bear, white as a white man, the emperor, the nemesis, the embodiment of evil.

2. All Quiet on the Western Front by Erich Maria Remarque

This World War I novel was published in 1929 and details the intimate experiences and daily lives of young soldiers, highlighting the trauma of war. Dylan described it as a horror story.

“This is a book where you lose your childhood, your faith in a meaningful world, and your concern for individuals,” he said. “You’re stuck in a nightmare. Sucked up into a mysterious whirlpool of death and pain … Once you loved life and the world, and now you’re shooting it to pieces.”

He went on to describe the senseless nature of war, the chain of command, and its dehumanizing impact on soldiers:

Who’s profiting here? The leaders and the generals gain fame, and many others profit financially. But you’re doing the dirty work … You can’t see how anybody in civilian life has any kind of purpose at all. All their worries, all their desires – you can’t comprehend it … Sickness and humiliation have broken your heart. You were betrayed by your parents, your schoolmasters, your ministers, and even your own government … All that culture from a thousand years ago, that philosophy, that wisdom – Plato, Aristotle, Socrates – what happened to it? It should have prevented this.

After outlining the plot and lingering on its visceral horror, Dylan concluded by saying, “I put this book down and closed it up. I never wanted to read another war novel again, and I never did.”

3. The Odyssey by Homer

This classic, epic poem is believed to have been written around the eighth century B.C., and is the second oldest work of Western canon. It follows the events of The Iliad, in which the Greeks and the Trojans engage in an epic, bloody, ten-year war. Tired from the war, Odysseus seeks to return home to his wife. His journey takes him an additional ten years, as he faces a series of obstacles, temptations, and strange encounters.

Dylan related Odysseus’s experience to his own on the road:

In a lot of ways, some of these same things have happened to you. You too have had drugs dropped into your wine. You too have shared a bed with the wrong woman. You too have been spellbound by magical voices, sweet voices with strange melodies. You too have come so far and have been so far blown back. And you’ve had close calls as well. You have angered people you should not have. And you too have rambled this country all around. And you’ve also felt that ill wind, the one that blows you no good.

Using The Odyssey, Dylan brought his discussion topic back to music. He concluded by saying:

When Odysseus in The Odyssey visits the famed warrior Achilles in the underworld – Achilles, who traded a long life full of peace and contentment for a short one full of honor and glory – tells Odysseus it was all a mistake. “I just died, that’s all.” There was no honor. No immortality. That’s what songs are too. Our songs are alive in the land of the living. But songs are unlike literature. They’re meant to be sung, not read … And I hope some of you get the chance to listen to these lyrics the way they were intended to be heard: in concert or on record or however people are listening to songs these days. I return once again to Homer, who says, “Sing in me, oh Muse, and through me tell the story.”

You can read the full transcript here.

More like this
Culture
6.26.2022 12:30 PM
40 years, The Thing set a new standard for sci-fi thrillers — and accidentally inspired a modern movement
By Andy Crump
Culture
6.21.2022 7:55 PM
You need to watch the most nostalgic time-travel movie on Netflix before it leaves next week
By Jake Kleinman
Culture
6.20.2022 11:36 AM
Look! 8 bodacious pages from Netflix’s Stranger Things coloring book
By Robin Bea
Related Tags
Share: