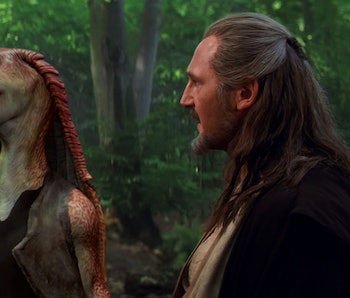 Some events in a galaxy far, far away are more universally accepted than others in our own galaxy. For years, George Lucas’s prequel trilogy — set a few decades before his original ‘70s-era Star Wars trilogy — has been reviled by Star Wars fans. It was the popular thing to hate the prequel trilogy; and at one point it seemed to be going down the same cultural garbage shoot as Nickelback, Axe Body Spray, and Internet Explorer. But the past couple of years have seen a resurgence in the prequel trilogy’s popularity. Ragging on the prequels is no longer the “cool” thing to do, and Star Wars fans recently proved that by rallying to shut down a YouTube video by popular list-making site, WatchMojo, which totes over 14.5 million subscribers.

The video in question (below), “Top 10 Reasons Why the Star Wars Prequels are Hated,” riffs on what’s assumed to be the Star Wars fandom’s general hatred for Lucas’s prequel trilogy. The first of the prequels, 1999’s Star Wars: The Phantom Menace, introduced the world to easily unlikeable characters, such as Jar Jar Binks (“Ye gods, whattsa meesa sayin’?”), and a frankly unbelievable plot where a 16-year-old Queen Padmé Amidala is more interested in 10-year-old Anakin Skywalker than his ‘90s-tastic future mentor Obi-Wan Kenobi. But that doesn’t mean fans aren’t willing to protect the movies from haters.

Since being posted to YouTube on May 31, the video has racked up (at the time of this article) almost 3,000 likes and 17,500 dislikes. The dislikes really started to pour in, it seems, when someone posted the video to the popular subreddit r/PrequelMemes, which has about 242,000 subscribers and is dedicated to, yes, memes about the Star Wars prequel trilogy. Most of the memes are positive in nature, ribbing the prequels and admitting that, no, they’re not masterpieces, but they sure are entertaining.

As the dislikes piled up on the video, Star Wars prequel fans — most of them seeming to arrive at the video by way of r/PrequelMemes — flooded the comments section with modified quotes from the trilogy.

“In the name of r/prequelmemes, you’re under arrest WatchMojo,” YouTube user Fonzo commented. “I don’t like WatchMojo.com. It’s coarse and rough and irritating and it gets everywhere,” added Brett Sprague.

“Every single WatchMojo subscriber is now an enemy of the senate. Execute order 666,” Hamza B commented.

And a couple of the anti-video comments garnered, at one point, almost as many likes as the video.

This relatively small but passionate movement of fans to defend the prequel trilogy is part of a larger trend toward people accepting the films as what they are: truly enjoyable movies that, while kind of trash sometimes, still serve a purpose to the Star Wars universe. Plus, the memes that sprout from it are kind of great.