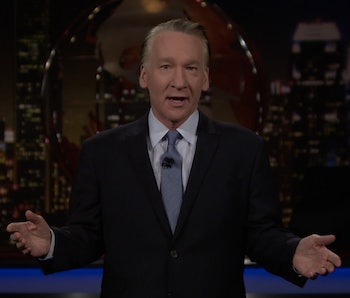 Bill Maher may have finally crossed a line he can’t come back from. During an interview with Republican Sen. Ben Sasse of Nebraska on Real Time with Bill Mayer Friday night, the HBO host made an offensive remark that sent the Internet reeling.

The conversation had meandered to Sasse inviting Maher to visit Nebraska. “We’d love to have you work in the fields with us,” Sasse said.

“Work in the fields? Senator, I’m a house n——,” Maher said, to which some in the audience groaned, while others applauded. The whole thing made for an unequivocally awful moment of TV, with Maher barely backtracking afterward, following his comment by smugly saying, “It’s a joke.”

The word was not bleeped out when Real Time was rebroadcast on HBO early Saturday morning, but HBO has now released this statement:

Bill Maher’s comment last night was completely inexcusable and tasteless. We are removing his deeply offensive comment from any subsequent airings of the show.

Maher himself has not made any official statement as of yet, but the internet has not stopped criticizing the comedian since the show aired.

Black Lives Matter activist DeRay McKesson called for action against Bill Maher and unpacked his use of the racial slur.

Even Chance the Rapper tweeted that he should be canned.

Westworld star Jeffrey Wright was also quick to put Maher in his place.

Others tweeted that Maher already had a history of making offensive comments.

Others wanted to say that they already thought Maher was a hack and that this is just the latest example of his tone deaf, offensive style of comedy.

There were also strong words for anyone supporting him.

Since it doesn’t look like Real Time is getting canceled as of yet, Maher could choose to say something reflective about his decision to use the racial slur on his next show. But he probably won’t.