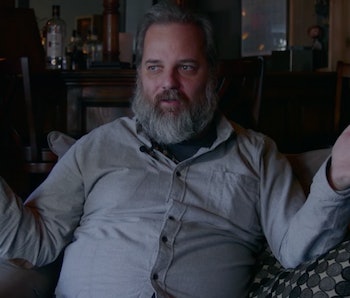 On the surface, Rick and Morty seems like an irreverent, bizarrely funny cartoon about the misadventures of a drunken mad scientist and his wimpy grandson. But anyone who’s watched Rick and Morty’s knows that the show is actually a very dark, hyper-meta mediation on the absurdity of existence. Try to think of any other show in the history of television that has the main characters travel to another reality in which they’ve recently been killed, bury their own corpses, and then take their places for the rest of the series.

In the latest Rick and Morty teaser video, co-creator Dan Harmon addresses some of the underlying philosophical themes that make the show so next level. To Harmon, the fun lies in really skewering our obsession with the meaning of life.

“That is a fun thing for me, the idea that we have gods, we search for meaning and we think of that as the highest thought we could have,” he says.

Harmon’s central device for exploring this is, of course, Rick. “Campbell calls God an impersonal, cosmic force. That’s the most terrifying thing about it, it doesn’t give a fuck about you,” Harmon says. “Rick is the seam between God and man.”

And as that seam, Rick really doesn’t give a fuck either. He’s the kind of creator who makes a sentient AI machine whose only purpose is to deliver butter.

But as much fun as Rick’s cynical dogma is to write, Harmon says he doesn’t totally prescribe to his “nothing means anything” philosophy. “The knowledge that nothing matters — while accurate — gets you nowhere,” Harmon says.

On the upside, once you accept the baseline that everything is meaningless, he argues that your individual experience becomes all the more important. “Once you get through that terrifying threshold of accepting that, then every place is the center of the universe, and every moment is the most important moment and everything is the meaning of life.”

Rick and Morty will return to Adult Swim in July.

More like this
Entertainment
7.3.2022 2:00 PM
How Marcel the Shell invented "never been done before” stop-motion
By Eric Francisco
Entertainment
6.22.2022 11:00 AM
20 years ago, Disney's most chaotic sci-fi experiment ever paid off
By Rebecca Long
Culture
6.30.2022 11:30 AM
You need to watch David Fincher's most important techno-thriller before it leaves Netflix this week
By Eric Francisco
Related Tags
Share: