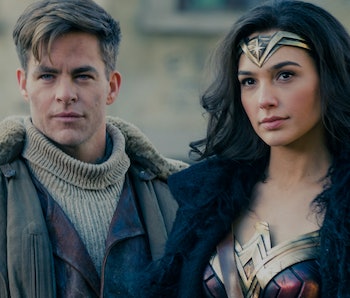 Wonder Woman may be a fierce warrior, but as seen in her just-released solo film, she really stands for love and peace. That said, there isn’t a force on Earth powerful enough to stop the seemingly endless war between DC and Marvel. Chris Pine, one of the movie’s stars, took a little shot at the competition during a recent interview while talking about how the truly optimistic Wonder Woman stands out from the legion of other superhero movies populating the box office these days.

“Within this genre, it’s difficult to do something new,” Pine told ScreenSlam during the Wonder Woman press junket. “And, usually you just see a bunch of people killing one another in the outfits and blowing up cities, and, you know. Like, I know there’s a thing called Infinity War coming out, which I like, I don’t… Really? Like, Infinity War? We need more war for all time?”

Pine went on to praise the film for focusing on “a woman who’s about love and compassion, and love trumps all. How great is that?” he asked, rhetorically. “That’s a pretty crazy awesome thing.”

On the one hand, it’s rich hearing a star from the notoriously dark and gritty DC Extended Universe slam the Marvel Cinematic Universe for being too pessimistic. But, Wonder Woman actually is that good, bright, and optimistic. Marvel might have a much, much better track record so far, but as Pine alludes, MCU entries are getting increasingly formulaic — and Infinity War is going to be the second movie with “war” in the title that Marvel’s released in less than three years.

Wonder Woman is currently in theaters.