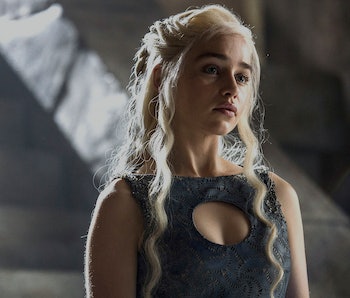 Of the five potential Game of Thrones spinoffs that are being developed at HBO, Robert’s Rebellion was the most hotly anticipated. The events leading to the main story have been hyped for six seasons now — and when George R. R. Martin announced that it will not be among the potential spinoffs, many fans were disappointed.

The story of Jon Snow’s parents Rhaegar Targaryen and Lyanna Stark getting together — triggering a war that ultimately led to Jamie Lannister slaying the Mad King and Robert Baratheon claiming the Iron Throne — is a hell of a tale. All of its events have been referenced on Game of Thrones in individual parts, but the entire tapestry begs for room to play out as its own show. There’s one reason, however, why it’s good that a Robert’s Rebellion show isn’t coming to fruition: Rhaegar Targaryen.

If Game of Thrones is Hamlet, Rhaegar is the prince’s dead father; if it’s Rebecca, he’s Maxim de Winter’s mysterious first wife. Daenerys’s deceased oldest brother is a ghost that hangs over the narrative, constantly referenced but never shown. His memory is practically a living presence in its own right.

But if a Robert’s Rebellion show happened, Rhaegar would have to appear in the flesh. The show could no longer lean on merely having other characters discuss how he was simultaneously dreamy and smart; skilled in battle and music.

To hear others speak of Rhaegar, he sounds improbably perfect. He was a kind and benevolent ruler beloved by his people, so dazzling even Cersei found him attractive. His one — admittedly glaring flaw — was falling in love with the wrong person. In absconding with the already-betrothed Lyanna Stark, Rhaegar condemned them both to death and pretty much set the Starks up for their current woes.

Of course, aside from triggering a war, Rhaegar can’t possibly be as perfect as everyone has made him sound. A show about Robert’s Rebellion would need to flesh him out with flaws and humanity. But in doing so, it would diminish his power.

The Faceless Man was an awesome character when he first appeared in Season 2. But when Season 5 and 6 oversaturated the viewer with his circular riddles, he grew tiresome. Sometimes less is more, and now the lack of a Robert’s Rebellion show ensures that Rhaegar’s enigma can’t be tarnished.