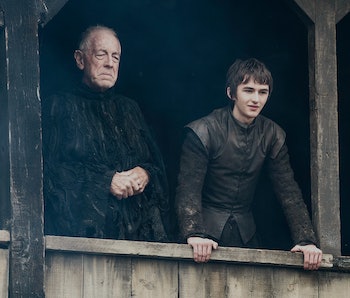 Bran Stark is boring. Sure, the dude has his moments like accidentally brain-hijacking Hodor and helpfully uncovering the mystery of who Jon Snow’s mother really is. ,But, in terms of dynamic character moments, spending several Game of Thrones seasons on a vague journey isolated from other characters is hardly comparable to dying and dramatically returning from the dead or blowing up a city to claim the Iron Throne. Although it’s not his fault, “Bran Stark is the most exciting character!” is not a sentence that’s commonly said among Game of Thrones fans.

However, Bran’s comparable vanilla nature might change soon, if one increasingly popular and totally wild Game of Thrones theory is confirmed in Season 7. Namely, that Bran Stark and Bran the Builder are one and the same. To go even further, Bran might also be his uncle Brandon — Ned Stark’s brother who was killed by the Mad King. In short, the name “Brandon” isn’t just being used in House Stark to honor ancestors. Every Brandon is actually the same guy.

If this is true (and that’s a big if), it means Bran Stark is hugely important to defeating the White Walkers in the wars to come, and it means the phrase “there must always be a Stark at Winterfell” is directly related to Bran. Let’s examine it.

[Bran the Builder](http://gameofthrones.wikia.com/wiki/BrandonStark(the_Builder) is Bran’s ancestor who founded House Stark. He built Winterfell and was instrumental in helping to build The Wall. The fact that they share a name did not seem significant in the show’s first five seasons.

But when Season 6 revealed that Hodor was brain-damaged because of Bran traveling back in time and accidentally messing with his mind, unexpectedly connecting past and present in a closed time loop, that changed the implication of this name-sharing.

Check out this passage from A Game of Thrones:

Sometimes Nan would talk to him as if he were her Brandon, the baby she had nursed all those years ago, and sometimes she confused him with his uncle Brandon, who was killed by the Mad King before Bran was even born. She had lived so long, Mother had told him once, that all the Brandon Starks had become one person in her head.

Season 7 might very well reveal that all Brandon Starks are one person. If that’s the case, then Bran Stark could be the key to defeating a threat his oldest ancestor had to contend with: The White Walkers. After all, the mysterious magic that built the wall kept the White Walkers at bay for hundreds of years. If Bran is able to tap into his past, the knowledge he gains could be key to keeping them at bay again.

Season 6 confirmed the long running fan theory that Jon Snow’s real parents are Lyanna Stark and Rhaegar Targaryen. Now that the show has set a precedent for confirming fan theories, this is one to keep an eye on.