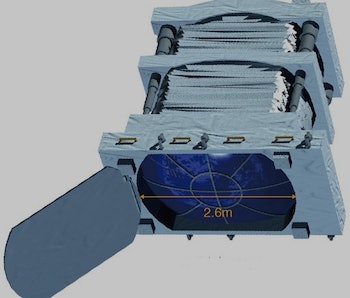 Right now, NASA estimates, more than 500,000 pieces of debris are clogging Earth's orbit, slinging around the planet at 17,500 mph. The danger to spacecraft and satellites is obvious, even if you missed Gravity.

Half a million chunks of space garbage make for a massive clean-up project, and an urgent one. What to do for it? Frickin' laser beams, that's what.

Japanese researchers are developing a laser beam that could be attached to the International Space Station to blast the junk away. Once the laser is up and running, it would be capable of firing 100 laser pulses a second, powerful enough to eliminate 100,000 pieces of garbage a year.

The plan is to use the beams to push objects away from the ISS and toward Earth, where the scrap would burn up harmlessly in the atmosphere.

EUSO, as the contraption is being called, could be installed on the ISS by 2017. Funding and politics, though, will surely delay that date.

“We may finally have a way to stop the headache of rapidly growing space debris that endangers space activities,” said engineer Toshikazu Ebisuzaki of the device, which took five years to develop.

As fanciful as it sounds, the laser might be our best hope of cleaning up space. Discover points out that the next best option to eliminate debris is to avoid creating it in the first place. Under a method called “design for demise,” satellites would be built to automatically dissolve once they’re no longer of use.

“A simple way to do this,” Corey S. Powell writes in Discover, “is to equip a satellite with a small sail that would pop open when it is no longer needed. The so-called gossamer sail would act like a space parachute, using the pressure of sunlight and the extremely thin traces of atmosphere in orbit to create drag. The drag would then pull the satellite down to a fiery demise.”

Drag chutes that suck defunct satellites out of circulation, great idea for the future. For existing debris, though? That's a job for Japanese-made space laser cannons.

More like this
Science
Jan. 25, 2023
40 years ago, NASA launched the space telescope that proved JWST could work
By Jon Kelvey
Science
Jan. 22, 2023
This nuclear-powered rocket could get humans to Mars in less than 2 months
By Universe Today and Matt Williams
Science
15 hours ago
JWST captures Chariklo’s rings and more: Understand the world through 8 images
By Robin Bea
LEARN SOMETHING NEW EVERY DAY.
Related Tags
Share: