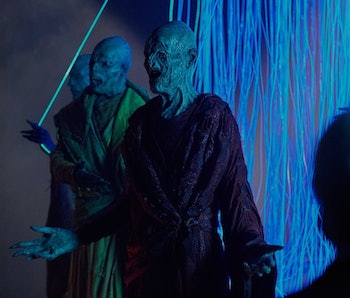 The desiccated, red-robed Monks who have been running doomsday simulations on the Earth for centuries don’t have a backstory on Doctor Who yet. Even the Doctor (Peter Capaldi) himself has been too busy trying to figure out their game to verbalize his thoughts on these shapeshifters. But just because the Doctor is reeling doesn’t mean Who fans haven’t started to try and put the pieces together.

This post contains spoilers for Doctor Who Season 10, Episode 7, “The Pyramid at the End of the World,” and, possibly, future (or past) Who adventures, because that’s how this show works.

The post-episode discussion thread on r/DoctorWho for this weekend’s “The Pyramid at the End of the World” has been especially busy due to the episode’s nail-biting cliffhanger. The Doctor finally regained his sight, but only after Bill (Pearl Mackie) gave her “consent” for the monks to save the world and, subsequently, take it over. The Doctor might be President of Earth during times of crisis, but the Monks are now the rulers.

But who are these Monks, where are they from, and what do they want?

The only thing Who fans know about the Monks right now is that they’re not easily duped, that they’ve got some seriously powerful technology, and that they take the form of whatever creatures they’re currently harassing. The Monks see humans as disgusting corpses due to the whole “humanity is doomed no matter what” storyline, so they take the form of disgusting, mummified corpses.

But some Who fans are debating about whether or not these mysterious Monks are actually Time Lords.

The main arguments for the Monks being Time Lords come from Reddit users “jackovthegreat” and “NightFire19”, who posit that the pyramid from the episode is actually a TARDIS, and that the Monks are Time Lords who have run out of regenerations, respectively.

During Tom Baker’s time as the Fourth Doctor (and during a couple other adventures), his long-time nemesis and frenemy, the Master, appeared as a rotting corpse, as he decayed while still manipulating another Time Lord, Chancellor Goth. The Master has also appeared as his decaying self in several Doctor Who spin-off comics. So, decay isn’t all that out there for Time Lords. The Monks’ appearance doesn’t rule out the Time Lord theory.

But the way Time Lords are always presented might rule it out. As user “Jarmatus” points out, “Time Lords have always been arrogantly proud,” and “presence of even one Time Lord in person has been treated with so much weight before, they wouldn’t just have a bunch of disposable, visually indistinguishable no-name Time Lords.”

And while it would be an interesting move on showrunner Steven Moffat’s part to completely rewrite the authoritative presence of Time Lords on his way out the door, it feels like an unlikely move. Moffat definitely has something else up his sleeve for his final bow.

Doctor Who Season 10 airs on BBC and BBC America on Saturdays at 9 p.m. Eastern.