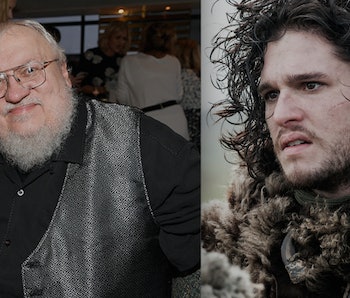 LiveJournal, like MySpace, its the ghost of internet eras past. It still exists, but its relevance has faded in favor of more specialized services like Twitter and Tumblr, blog platforms like Medium and TinyLetter, and fiction sharing sites like Wattpad. LiveJournal was founded in 1999 and peaked in the early 2000s as a place to exchange ideas, share writing, and argue with strangers online. Today, it’s essentially the Walkman of social media.

But unlike MySpace, there is one curious factor that keeps millions of readers coming back to LiveJournal in 2017. Namely, that the biggest fantasy author in the world still uses it.

It’s objectively absurd that George R.R. Martin uses LiveJournal. His A Song of Ice and Fire novels have sold millions of copies; their television adaptation Game of Thrones is the biggest show in the world. There’s an entire cottage industry around reporting on every movement from the set; pouncing on every clue in promotional images. The Season 7 trailer currently has over twenty-eight million views. The man can afford to pay a webmaster to make him a modern, aesthetically pleasing website. It can even have a blog tab if he still wants to keep one!

But Martin has chosen to stick with his LiveJournal, which he maintains is “not a blog” but nonetheless uses to write about personal disappointments, his travels, thoughts about favorite TV shows, and share his “current mood” with a little emoji detailing his chipperness or creativity.

And as a result of the mass interest in Game of Thrones, millions of people in 2017 are still heading over to LiveJournal every so often to page through emojis about “current mood” and try to get him to respond to comments.

When the news broke that Game of Thrones is potentially getting as many as four spinoff shows, Martin clarified the information that it was actually five, and the two most popular plot lines are off the table. Where did entertainment journalist and and thousands of fans head to find and report on this information? LiveJournal.

Like a Maester at the Citadel, Martin scribes his words for the masses in an obscure location. And like Sam Tarly, we make pilgrimages to its shores and wave awkwardly — because he gives us no other choice. There’s nowhere else to seek this information.

If The Winds of Winter ever finally gets a release date, LiveJournal will be responsible for breaking the most anticipated news in the fantasy book world. Martin is singlehandedly keeping the internet’s Old Gods relevant.