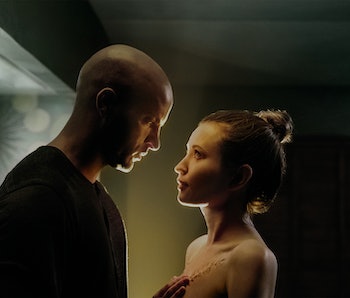 Over the first four episodes of Starz’s American Gods, Shadow Moon has tangled with an angry leprechaun, his dead wife, and old mythological gods. He’s met the mysterious New God of Technology and New God of Media in two brief scenes, but in the fifth episode he introduces their leader and explains what, exactly, their grand conflict with Wednesday is all about.

“The barriers were thinner then, between people and their gods”

Just like all the other episodes, “Lemon Scented You” begins with a narrated cold open that most resembles the gory Viking cold open that kicked off the series. It follows an ancient people from Siberia as they travel through harsh conditions to a new land, only to find it barren. But, the key difference here (aside from the CGI) is that this particular open acknowledges that gods can die and be forgotten. For the first time, American Gods shows how the gods are truly vulnerable to their people, even as the main narrative often shows the opposite.

“You have an image problem. You need to think about your brand”

The god Media appeared as Lucy Ricardo in “Head Full of Snow.” Here, she appears as David Bowie, in a show-only sequence that’s far more Bryan Fuller than Neil Gaiman. The scene is a much-needed addition to acknowledging the heaviness of the first episode’s lynching (“Tasked with asking a few questions, you hang a black man from a tree,” she tells Technical Boy).

It’s also necessary to flesh out the New Gods’ goals. While the Old Gods are trying to stay relevant in an America that no longer believes in them, the New Gods have a murky sense of purpose, never quite cohering, even in Gaiman’s novel. By linking the New Gods to the modern concept of “brands,” the show presents the New Gods as America on social media steroids.

“As I suspect strongly, this is not the average case”

When Wednesday and Shadow are interrogated by human cops, both men show their true nature. When Shadow is under pressure, he goes silent and gets focused. He demands a lawyer, still putting his trust in human systems and institutions in spite of the surreal events that have invaded his life.

Wednesday, on the other hand, reverts to the confused old man persona he affected in his very first airport scene in “The Bone Orchard.” But he then begins toying with the policeman by telling him the true story of his ventures, knowing that he won’t believe him. (“Now, the leprechaun is against all this from the get-go, but he’s at a disadvantage, being as he is a fucking idiot,” he gravely explains). Even though Wednesday is not responsible for the ensuing disaster at the police station — that honor goes to Laura — this episode shows his power, and acknowledges his magic more overtly than any other.

“Give me my fucking coin, dead wife”

Like the David Bowie sequence, Mad Sweeney and Laura’s entire interaction is in the show only. In the book, Laura wreaks havoc against Shadow’s enemies offscreen, while Mad Sweeney’s journey is also largely between the lines of the narrative. There were no signs that these two arcs intersected — but playing these two stubborn and aggressive characters off each other is an inspired move. Where they seemed incidental and even random in Neil Gaiman’s novel, their subplot is suddenly engaging and weighty in the show. It’s a microcosm of the larger conflict, as Mad Sweeney is set in his old ways, and Laura is a new and unexpected obstacle in his path.

“I know you. You’re a person. I know people, everything about all of them”

The second New Gods scene is less successful than the first — both because it goes on for too long, and because it feels too blatantly like an information dump. Nevertheless, Crispin Glover’s Mr. World gets a fitting introduction. Like most of the gods who have appeared thus far, he’s strange and unhinged and creepy. He also comes with an air of otherworldly knowledge and gravity that’s been missing from earthy gods like the Zorya sisters and Czernobog. This is truly not a guy you want to cross. It’s a fascinating prospect that the New Gods don’t want a war with the Old Gods, and that Wednesday’s war is one-sided.